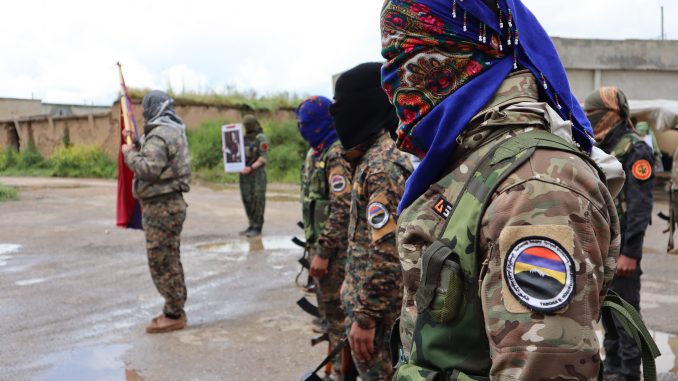 On the 104th anniversary of the Armenian genocide, revolutionary forces in Rojava established the Martyr Nubar Ozanyan Armenian Battalion. The battalion is named after Armenian guerrilla Nubar Ozanyan, who fought in the ranks of the Popular Front for the Liberation of Palestine (PFLP), and later as a commander with the Liberation Army of the Workers and Peasants of Turkey (TİKKO) in Rojava, the autonomous zone of the revolutionary Kurds and their allies in northern Syria. Formation of the brigade was announced April 24, the Armenian Genocide Memorial Day, which is especially commemorated by Armenians within Syria, where much of the genocide actually took place.

The founding statement read: “As the children of the Armenian people, who were massacred and exiled in the genocide period, we came together to strengthen the revolution in the grounds of Rojava and to defend Rojava against the fascist attacks of ISIS and the Turkish state.” (Abolition Media Worldwide)

The TIKKO is a faction of Turkish armed left linked to the outlawed Communist Party of Turkey—Marxist–Leninist (TKP-ML). Nubar Ozanyan died fighting ISIS in 2017.