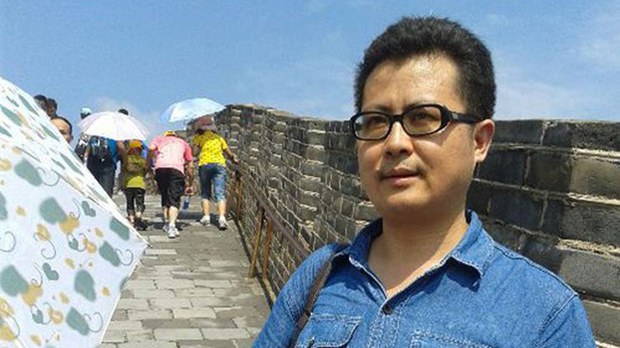 Chinese rights activist and attorney Guo Feixiong was detained at Shanghai’s Pudong International Airport Jan. 28 after border police prevented him from boarding a flight to visit his ailing wife, Zhang Qing, who is being treated for cancer in the Washington DC area. Guo had time to get out a text message saying he was being accused of “endangering national security,” and announcing that he would immediately begin a hunger strike in protest, before his phone went silent. Family and friends have not heard from him since.  He was at the Shanghai airport for a connecting flight from Guangzhou, where he had spent the previous weeks, and reported that he was being followed by plainclothes police officers.

Guo, 54, had been petitioning authorities for the right to travel unimpeded, including issuing personal appeals to President Xi Jinping, Premier Li Keqiang and Public Security Minister Zhao Kezhi. When these went unanswered, he publicly stated that he was prepared to launch a hunger strke if barred from leaving the country.

Known by his pen name Guo Feixiong but born under the name Yang Maodong, he has been imprisoned twice since 2006 for a total of 11 years—over the publication of an unauthorized book exposing corruption in northeast Liaoning province, and for taking part in a week-long protest vigil against censorship of a local newspaper in Guangzhou. In 2016, he spent more than a month on hunger strike at Yangchung Prison, Guangdong province, in protest of harsh conditions. He was released in August 2019, after serving a six-year term over the Guangzhou protest on the usual charges of “disturbing social order” and “picking quarrels and provoking trouble.” He has long been associated with the New Citizens’ Movement dissident network. (SCMP, SCMP, RFA, Frontline Defenders)

See our last post on the crackdown on dissent in China.