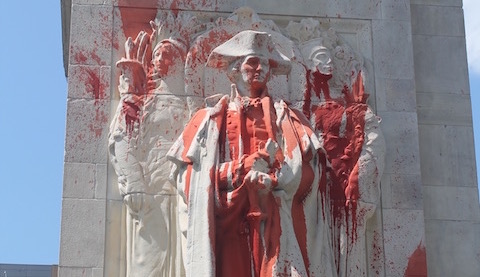 The sight of statues of Confederate generals and slavocrat politicians coming down in several states across the country is a long-overdue correction. There is no ambiguity on what those monuments to Robert E. Lee, Jefferson Davis, John Calhoun represented. These men stood in life for the most oppressive white supremacy, and their images were raised after their deaths as proud signifiers that the fundamentals of white supremacy remained intact despite the Civil War and Reconstruction. These monuments were raised as ritual intimidation and humiliation of African Americans. But things get a little more complicated when monuments to figures on the Union side are targetted, such as Ulysses S. Grant. Bill Weinberg explores the dilemma for Lower Manhattan’s new online newspaper, The Village Sun.