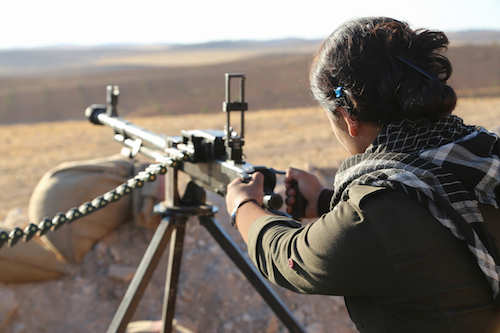 The role of women in war is typically dominated by images of women as victims, peace-makers, or home-makers to be protected by male fighters. But in Kobani, the Kurdish town in northern Syria now besieged by ISIS, women are taking… Read moreKurdistan’s female fighters

The role of women in war, peace and revolution has long been portrayed in manifold, often contradictory ways. Images of women as victims, pacifist peace-makers, protestors, and home-makers have dominated literature. Opposed to these images we find that the male figure is represented as a fighter, the ones who take part in war and defend the motherland against the enemy. The homeland is thus a female body, a passive and defenseless geography which requires brave men to defend and protect her. It could be argued that history is written by men; therefore they narrate it in a manner that suits the usual gender stereotypes.

The Middle East, North Africa and their female populations in particular have been represented, portrayed and stereotyped in different ways, at different times and in different contexts. Take a look at the media coverage of the recent uprisings in the Middle East and North Africa region. News of the sexual harassment of women in the "Arab uprising," brutal attacks, imprisonments and virginity tests of female protestors dominated the screens. Yet women played a significant role in these events. For them, the uprising was part of a long history of resistance to suppression and a lack of freedom in their countries. The fact is that women were fighting and have proved their existence despite the counter-revolutionary and anti-women treatment that they were receiving.

Today this portrayal is reversed. We now see photos, video footage, reports, documentaries and writing about the Kurdish female freedom fighters in Kurdistan. Kobanê, a predominantly Kurdish city in Rojava (Syrian Kurdistan) on the Syrian-Turkish border, is dominating our thoughts, our understanding and perception of the role of women in society and revolution.

Renewed fighting between India and Pakistan across the Line of Control in Kashmir follows devastating floods in the divided region, which have deepend local anger.

Lawmakers in South Sudan passed a controversial bill that gives security forces the power to arrest suspected criminals without a warrant, prompting an opposition walk-out.