In July 2015 a new phase of the decades-old conflict between the Turkish government and Kurdistan Workers Party (PKK) militants erupted after a two-and-a-half year peace process failed: the largely rural guerrilla war entered majority-Kurdish towns and cities in the southeast as government forces went house-to-house to root out PKK-linked fighters.

Fighting was most intense in the central neighborhoods of Sur district, a UNESCO World Heritage site in the provincial capital of Diyabakir, where ancient fortified walls surround historic mosques, churches, and synagogues. The ten months of conflict, including a three-month siege that damaged or destroyed the majority of buildings, has left many of those displaced by the violence feeling as if they must now fight for their homes and for their community and culture to live on.

On the hunt for votes ahead of his June re-election, Turkish President Recep Tayyip Erdogan visited Sur in March, promising to renovate the district as part of a 2.3-billion Turkish lira ($500 million) plan to revitalise the southeast. He spoke of creating a vibrant economy and a new tourism boom.

But most of Sur’s original residents – the majority Kurds, 24,000 of whom are still displaced by the fighting, which lasted until March 2016 – won’t be able to afford the new buildings going up where their homes once stood.

This situation has expanded the enmity between local Kurds and the central government. Many displaced residents say they believe that Erdogan's administration—which, following a June election victory, will remain in place until 2023 with expanded executive powers granted by a 2017 referendum—is profiting from displacement and engaging in demographic re-engineering by pricing out displaced Kurds, a minority long discriminated against by the state.

"The reconstruction is aimed at shaping the society through space, erasing the memory and creating a new memory,," said Nevin Soyukaya, an archaeologist with the SUR Platform, a group of citizens monitoring the reconstruction of Sur. Soyukaya personally helped place the district on the UNESCO World Heritage Site list in 2015, just months before conflict erupted. "Therefore, this is an attempt to change not only the physical structure, but also the demographic structure."

Many of the dwellings in Sur were "gecekondu," a Turkish term for informal structures meaning "built over night." State officials have come to view gecekondus as urban blight—areas of high crime and drug use—and have looked to raze them and rebuild to contemporary standards. This has happened elsewhere in the country, but in Sur the process is moving quickly, prompted by the damage from fighting.

For Cengiz Abis, a Kurdish Sur resident whose family home was razed, not only is government compensation too low to allow him to buy back what will eventually be built in its place, but the area where he grew up still feels like a war zone.

"Diyarbakir has been invaded," he says. "The whole city is filled with police stations, with armored vehicles. When we look around, all we can understand is that we are under occupation. There are plainclothes police everywhere. We are being followed and monitored all the time."

Nurullah Bilgin, provincial director of Turkey's Ministry of Environment and Urban Planning, told state media in late June that the redevelopment project in Sur is worth two billion lira (around $420 million), with 340 homes now under construction and 1,500 new residences planned.

"Sur will become an attraction center," Bilgin said, with the potential "to draw one million tourists."

The Housing Development Administration of Turkey, known as TOKI, has not released the names of the private contractors involved in rebuilding, nor did it respond to numerous requests for comment. Residents, employees at non-governmental organizations, activists, and politicians interviewed for this article said that the lack of transparency in the process has led them to assume that the most likely recipients of large-scale contracts are business leaders with close ties to Erdogan's ruling Justice and Development Party (AKP). 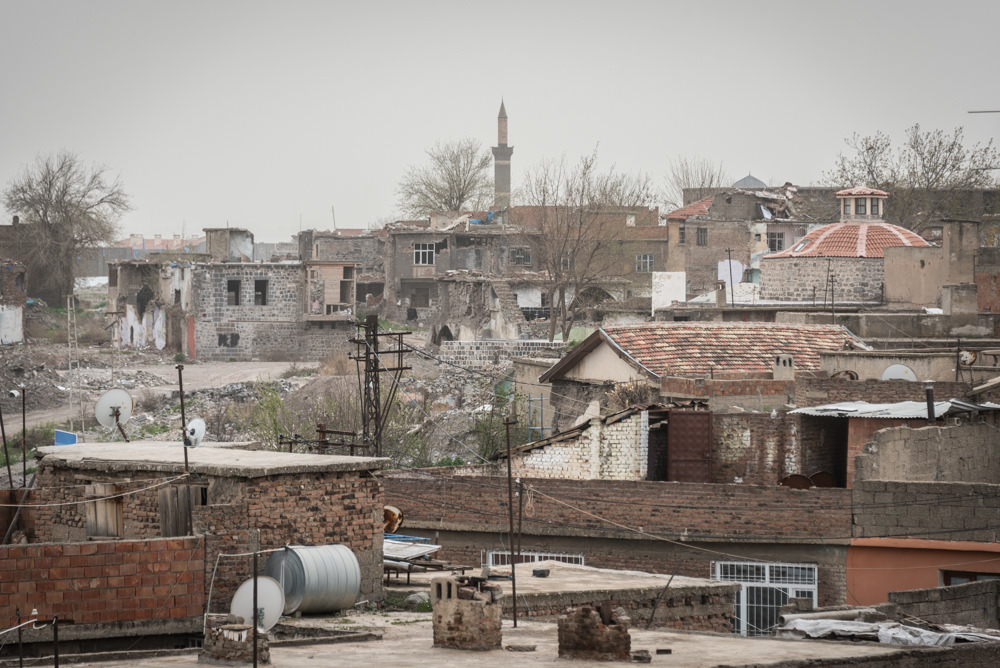 'It was everything we had'
The 2015 breakdown in a ceasefire between the state and the PKK led to ten months of street fighting followed by ongoing skirmishes, which, according to an International Crisis Group tally, claimed almost 4,000 lives, including 452 civilians.

Many of the casualties came from urban militant strongholds like Sur, where Cengiz Abis and his wife Emine each grew up and later bought a two-room flat together.

Around half of Sur's 120,000 mostly Kurdish residents fled during the fighting, but the Abis family had tried to stay in their home to protect their property, despite military curfews, fighting, and water and electricity cuts. But in March 2016 they were forced out and spent 15 months in prison, while their children were sent to a state orphanage.

All they have left of their Sur home are mobile phone pictures of living room furniture slashed open and flipped upside down on top of clothes scattered on the floor.

The photos were taken by a friend who tried to recover Emine's treasured wedding gown after she and her husband were sent to prison for allegedly aiding the PKK during the fighting (they were accused of acting as human shields and providing material aid to the group).

But the dress was nowhere to be found, and the home's appliances were gone.

When they were released and reunited with their children, they found they could not go home. Their house was in the walled-off security zone that covers the eastern half of Sur, where most residential buildings had been razed after the state declared all war-damaged structures unfit for habitation.

The place where the house once stood is now a field of weeds, frequented by the occasional stray cat, Emine said.

While state authorities are rebuilding the area, local Kurds argue that government compensation and offers of discounted housing elsewhere are inadequate.

"I saved up to buy [our house in Sur] for years and we fixed it up with our own hands," says Cengiz, now renting in Baglar, the low-income Diyarbakir neighborhood where many displaced Sur residents have resettled. "It was everything we had," Emine adds. "We will never feel at home anywhere else than Sur, and now it's gone."

The changing face of Sur
In west Sur, where most houses remain intact, the area's rich history as a cultural centre from Greek and Roman times, through the Byzantine and Ottoman periods, to the present day can still be seen in some of the aging structures left behind. Its alleyways still serve as communal patios where neighbors drink tea as their children play, away from the hectic traffic in the busy, new areas of Diyarbakir.

But, in recent decades, Sur has also come to represent poverty, a place where homes are rudimentary and lack proper sewage and heating. First proliferating during the mass rural-to-urban migration following World War II, construction of gecekondus intensified in places like Sur during the 1990s as conflicts ravaged surrounding villages, driving people into the cities.

The central government introduced renewal plans for the neighborhood in 2012, but they were put on hold until fighting subsided in 2016.

When the siege ended, security barricades closed off damaged areas and state officials ordered an "emergency expropriation" of about 60 percent of Sur properties. Large swathes of residential areas had been abandoned, and many houses collapsed under bombardment. These properties are now in the possession of the Ministry of Environment and Urban Planning.

Some religious and historic buildings were preserved, as the state embarked on ambitious plans to see Sur become a world-class tourism destination, following a promise by former prime minister Ahmet Davutoglu in 2015 to turn it into the next Toledo.

"These cities have faced unplanned growth since the 1990s, and would need urban renewal even if these events hadn't happened," he said at the time.

In September 2016, then-prime minister Binali Y?ld?r?m introduced an updated reconstruction plan for southeastern Turkey, which included an initiative to build 7,000 new homes in Sur. But the new homes now sprouting up will be relatively expensive: prices are believed to be in the range of 400,000-600,000 lira, or $87,000-130,000, far beyond the reach of many Sur residents like Emine and Cengiz. 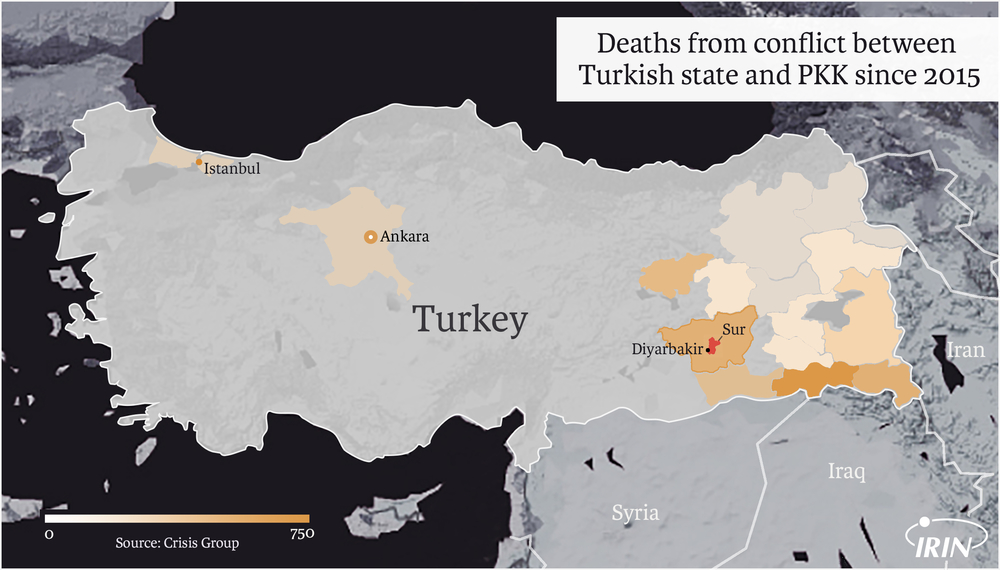 'I just want the field, the space where my house was'
Displaced residents of Sur whose homes are declared uninhabitable have a few options: accept a compensation payment, accept a discount on government-subsidized housing elsewhere, or fight it out in court.

The compensation varies widely and is based on the property size and the value of a household's furniture.

Remziye Tosun, 37, gained unwanted fame when security footage was posted on YouTube showing her being searched while she was evicted from Sur in March 2016.

Like the Abis family, she defied the government's orders and remained in her home during the conflict to protect her belongings, and was arrested as a result.

Tosun, like many displaced residents, also receives monthly compensation of 1,000 lira ($217)—though these payments are distributed inconsistently, according to those who receive them.

"This is hush money," says Tosun, recently elected as a deputy for Diyarbakir with the pro-Kurdish Peoples' Democratic Party (HDP). "I told them, ‘I don't want your money, I don't want your TOKI [subsidised housing], I want my house back." She adds: "I just want the field, the space where my house was. We will rebuild it. I would even be happy living there in a tent."

The Abis family are of a similar mind. Emine and Cengiz were offered 47,000 lira ($10,200) for their house. They say that amount wouldn't even cover their most recent renovation costs and have launched a lawsuit to get a better offer.

Tempted by a TOKI?
Aside from cash payments, the state is offering displaced residents a discount on apartments in state-subsidized, low-income housing or in high-rise buildings that locals call TOKIs, after the national housing administration. They are more modern than the gecekondus of Sur, but they don't appeal to everyone.

"TOKIs are far, far away [from the city center] and there is nothing near TOKIs except more of them, so you are isolated," Cengiz says. "Inside the buildings, you don't know your neighbors because you never see them. In Sur, it was different. We had close relations with our neighbours. We knew who they were."

"It's not about the price," he continues. "It's like taking a bird from nature and putting it in a cage. We want our freedom, and Sur's where our freedom was."

Not everyone views the reconstruction plans with cynicism. Altan Tan, who was born and raised in Sur and recently ran for office unsuccessfully with the moderate Islamist Saadet Party, said the gecekondus needed to be demolished and were unfit for occupation.

"I grew up in a gecekondu, and it's only nice for those who don't understand what that means," Tan says. "[The residents of Sur] are objecting because they are not getting enough compensation for their property. They know they can't buy a new home with whatever the state is offering them. It's a question of money, not politics, like everyone will have you believe."

Regardless, Tosun says she and others like her are determined to go back to Sur, to reconstruct the community they once had.

"The displaced residents of Sur… they are saving that rent money and waiting to buy the field where their house used to be," she says. "So when they are able to go back, they will, and they will start rebuilding and rebuild their lives. No matter what, one day, I will live in Sur again."

Photos by the author