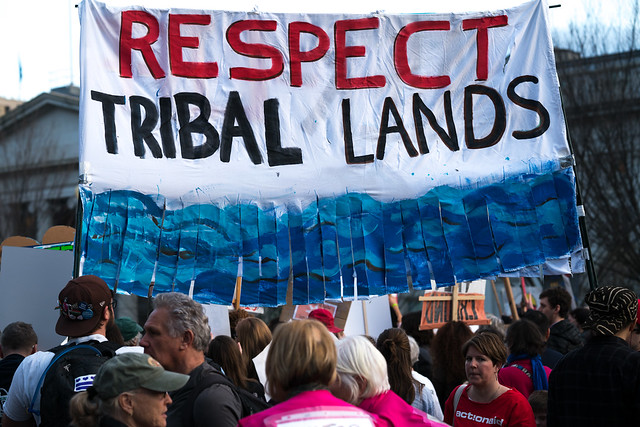 On March 23, Thomas A. Shannon, Jr., the Under Secretary of State for Political Affairs, determined (PDF) that issuing a permit to authorize the Keystone XL pipeline (KXL) “would serve the national interest.” In doing so, Under Secretary Shannon admitted that, from an environmental justice perspective, the 875 miles of the KXL traversing portions of Montana, South Dakota, and Nebraska, “could…disproportionally affect[ ]” Indian tribes in the region “should an oil release occur.”

The State Department’s national interest determination relied upon environmental reviews completed in 2014, but the legal, cultural, and social protests brought last year by the Standing Rock Sioux and other tribes to the Dakota Access Pipeline prompted a distinct shift in the world’s consciousness of tribal rights. Although the water protectors have been evicted from their camps and oil can now flow beneath Lake Oahe, Standing Rock’s legal challenge to the pipeline is yet to be resolved. As lawsuits over the State Department’s KXL decision begin to mount, the pending outcome of Standing Rock’s case may give tribes new grounds on which to challenge the State Department’s decision by properly protecting tribal treaty rights and the federal government’s trust responsibility to tribes.

Treaty Rights
At its core, tribal opposition to both Dakota Access and KXL simply seeks some legal accounting for the disproportionate burden often borne by Indian tribes when the federal government considers actions to be taken in service of broader, national interests. While the National Environmental Policy Act (NEPA) requires federal agency analysis of the potential environmental impacts, that law does not expressly demand specific consideration of the rights reserved by tribes in treaties with the federal government.

The history and nature of tribal treaty rights argue for their distinct treatment and recognition. Treaties have formed the basis of the governmental relationship between the United States and Indian tribes since before the nation’s founding. Treaty-making continued until 1871 and the interpretation of these time-honored, government-to-government bonds formed the basis of the Supreme Court’s foundational Indian law jurisprudence in Worcester v. Georgia.

The court took special care to account the rights of tribes enshrined in treaty language. In United States v. Winans, for example, the court made clear that those rights were not granted to tribes by the federal government but, instead, were reserved by the tribes in recognition of their pre-extant exercise of those rights. In addition, when a treaty reserved land for tribal homelands, the court recognized in Winters v. United States that the treaty also ensured adequate water rights necessary to fulfill those purposes. Although the court allowed for the Congressional abrogation of treaty rights in Lone Wolf v. Hitchcock, it also protected those rights from state interference in Washington Game Dept. v. Puyallup Tribe. The court further held in United States v. Dion that any Congressional intent to abrogate those rights be clearly evidenced and not be lightly inferred.

Given the Constitutional supremacy of treaties, the Standing Rock Sioux Tribe has pressed treaty rights as a basis for challenging the approval of the Dakota Access Pipeline by US Army Corps of Engineers. In doing so, the Tribe argues (PDF) that the Corps failed to adequately account for the potentially devastating impact that a failure of the pipeline could have on the hunting, fishing, and water rights that the Tribe reserved in 1851 and 1868 treaties with the federal government. In the Tribe’s view (PDF), it is not “just another stakeholder,” and the Corps had to do more than summarily determine that its permitting of the pipeline would “have no direct or indirect effects” on the Tribe or its treaty rights.

In opposing the Tribe, the Corps and Dakota Access argue that the agency sufficiently complied with its environmental review obligations under NEPA and that, by analyzing the potential impacts of its permitting decisions on the natural resources of the area around the pipeline, the agency also adequately analyzed the impacts on the Tribe and its treaty rights. According to the Corps, NEPA does not demand that the agency look at environmental impacts “through the lens of the Tribe’s rights.” Similarly, Dakota Access suggests that tribal rights were included within “the multitude of potential impacts” considered by the Corps.

If Standing Rock’s treaty rights require additional and specific analysis of the potential impacts of the Corps’ decision on those rights, the implications for the State Department’s review of KXL would be significant. For example, in response to tribal and public input expressing concern about the impact of KXL on tribal treaty rights, including rights flowing from the exact same 1851 and 1868 treaties at issue with Dakota Access, the State Department argued (PDF) that its review was consistent with NEPA and that the scope of such review is defined by location and alternatives without specific mention of or relation to tribal treaties.

Like Standing Rock’s concerns with Dakota Access, however, tribes across the proposed path of KXL face unique threats (PDF) to their treaty-reserved water rights. Although the State Department’s national interest determination recognized the potential “disproportionate impact” on tribes of a spill from KXL, the earlier environmental analysis, like that of the Corps, did not specifically analyze those impacts in the context of tribal treaty rights and reserved homelands.

Trust Responsibility
In addition to arguing that treaty rights demand analysis as well as the procedural requirements of NEPA, Standing Rock contends that the federal government’s trust responsibility demands protection of the Tribe’s rights and interests as a substantive outcome as well.

The federal government’s trust obligations to Indian tribes arose from the earliest Indian law jurisprudence of the Supreme court, which, as described above, reviewed and interpreted the nature of the federal-tribal relationship based on the terms of the treaties entered by and between the two sovereigns. Chief Justice John Marshall, after analyzing the treaty relationship that provided for the protection and service of tribal interests in Cherokee Nation v. State of Georgia, noted that the federal government had obligations to tribes like that of a guardian. From those roots, many of the court’s subsequent decisions have recognized the existence and contours of the trust responsibility, including, more recently in United States v. Navajo Nation, the narrow grounds on which tribes may recover money damages from the federal government for alleged breaches of trust duties. Notwithstanding the narrow limits in that context, however, Congress reaffirmed (PDF) the federal government’s more general trust duties to tribes just last year.

Standing Rock relies on those trust obligations to buttress its argument that any potential impacts the Tribe’s treaty rights demand to be reviewed more carefully than other potential environmental impacts. In addition, however, Standing Rock relies on prior lower federal court cases interpreting the trust responsibility to argue that the Corps was obligated to avoid a result that would unduly burden the Tribe, its interests or resources. The Corps and Dakota Access counter the Tribe’s assertion by arguing that the Supreme Court’s narrower interpretation of the trust responsibility in the context of damages controls and that, under that interpretation, the Tribe must demonstrate some clear statutory basis for the trust obligation to apply.

Those working on Standing Rock’s behalf have suggested that their challenges to the Dakota Access Pipeline are the starting point for a range of challenges to KXL and similar fossil fuel-related projects yet to come. While it remains to be seen whether the social protests that inspired thousands to join Standing Rock’s opposition to Dakota Access will materialize against KXL, the legal issues surrounding the Tribe’s treaty rights and trust obligations will certainly shape the litigation that various tribes may pursue to stop KXL. For Standing Rock, these matters will soon be resolved on the Tribe’s motion for summary judgment before the US District Court in Washington DC. But KXL and similar future projects threaten that, notwithstanding their treaty-guaranteed rights and time-honored federal trust relationship, tribes will continue to bear “disproportionate impacts.” It will fall to the federal judiciary to determine whether such burdens are the necessary costs of infrastructure projects of national interest or whether those interests are better served through broader federal recognition of the treaty-reserved rights and trust interests of tribes and their members.

Monte Mills is an Assistant Professor and Co-Director of the Margery Hunter Brown Indian Law Clinic at the Alexander Blewett III School of Law at the University of Montana. He teaches a variety of Indian law courses and works with clinical students on a range of legal matters in the Indian Law Clinic. Professor Mills also served as the Director of the Legal Department for the Southern Ute Indian Tribe in Colorado, where he represented and counseled the Tribe on a broad array of issues, including litigation in tribal, state and federal courts, legislative matters before the Colorado General Assembly and the United States Congress, and internal tribal matters such as contracting, code-drafting, and gaming issues.

This story first appeared in April 12 on Jurist