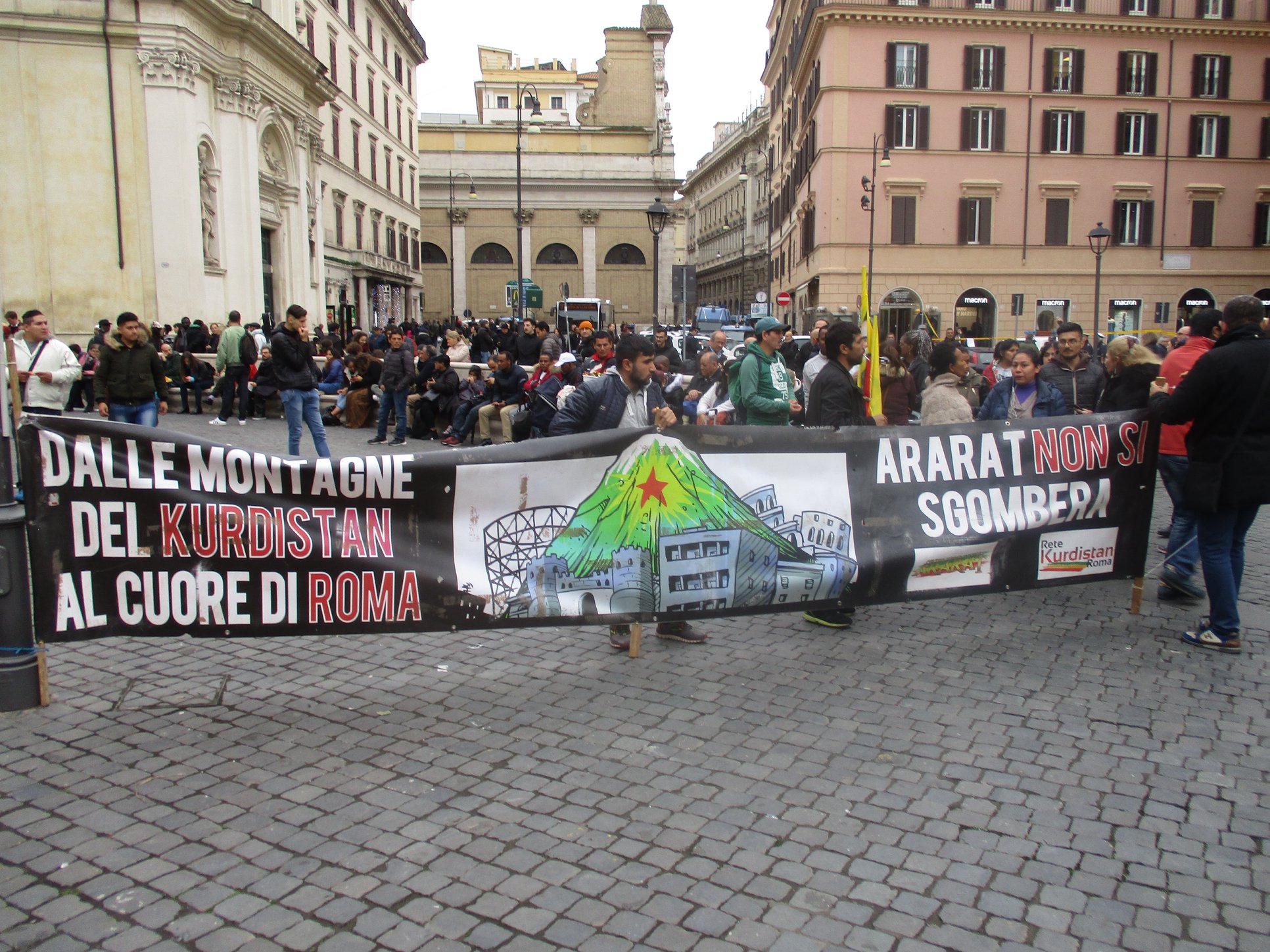 It was a multicultural crowd that gathered in Rome’s Plaza San Silvestro to oppose the draconian Security Decree then pending in the Italian parliament. Popularly called the “Salvini Law” after Italy’s far-right Interior Minister Matteo Salvini (who appears to be the real power behind the government), the Security Decree was explicitly aimed at two broadly overlapping groups: immigrants and squatters.

Many of those in Plaza San Silvestro were both. One prominent banner read: DALLE MONTAGNE DEL KURDISTAN AL CUORE DI ROMA, ARARAT NON SI SGOBERA. “From the mountains of Kurdistan to the heart of Rome, Ararat will not be evicted.” It displayed painted images of a mighty mountain and an old industrial building. Flying above the banner was the red-star flag of Kurdish revolutionary movement in Turkey and Syria.

Ararat is, of course, the famous mountain in Turkey’s Kurdish east, but here it also refers to the Ararat Kurdish Cultural Center, one of Rome’s many squatted community centers, in a reclaimed industrial space in the city’s outlying Testaccio district. There was another contingent at the protest of Peruvian migrants living in a squatted building, and yet another of squatters from various Horn of Africa countries. The contingents clustered in groups, while the riot police and paramilitary Carabinieri formed a ring around the perimeter of the plaza.

The Salvini Law, in addition to restricting the rights of migrants and refugees to asylum and government aid, also imposes a five-year prison term for squatting. It was passed Nov. 29, 2018, just six days after the protest in Plaza San Silvestro. Italy’s thousands of squatters—many of them displaced from their homelands in the Middle East, Africa and South America—are now in a precarious position.

The first mass evictions under the law sparked street-fighting in Turin on Feb. 10 after police raided the squatted community center called El Asilo (The Asylum).

Ferment in San Lorenzo
Rome’s San Lorenzo neighborhood, just east of the historic center, may be next to feel the heat. This area of mixed decaying apartment buildings and abandoned light industry has the city’s highest density of occupazioni. as squats are called. In this area, they are mostly community centers in reclaimed abandoned properties—generally dubbed CSOAs, for centro sociale ocupato auto-gestito (self-managed occupied social centers).

Communia is a self-described spacio de mutuo soccorso (space of mutual aid) facing a thoroughfare on the edge of San Lorenzo. A banner above the entrance reads OMNIA SUNT COMMUNIA—Latin for “The Commons is All,” the slogan associated with Thomas Müntzer, the radical theologian who became a rebel leader during the German Peasants’ War of 1524–5. Pass through the gate, and a big mural portrait of the revolutionary cleric adorns the warehouse wall across the courtyard.

Ylena, one of the volunteers at Communia, sees the area’s occupazioni as threatened by economic forces even apart from the Salvini Law—along with the neighborhood’s traditional commons. As San Lorenzo is gentrified, “public streets are being closed by private developers,” she says.

The struggle for control of space was dealt a propaganda blow in October, with the death of Desireé Mariottini, 16, who was apparently given drugs before being sexually abused in a derelict building in San Lorenzo, and suffered an overdose. Three migrants from Senegal and Nigeria were arrested in the case, and Salvini personally visited San Lorenzo to rail against the “worms” infesting the district. The case helped lubricate passage of his Security Decree.

But Ylena sees the crime as related to the squeeze on wholesome places for youth and the disenfranchised to gather. “When something like this happens, they say something must be done. But we have been saying for years we need more community spaces,” she says. “Now they can say everything sucks here, so we can destroy everything and build new houses. So we are trying to get legalized.”

Communia has moved through various locations in San Lorenzo since its founding in 2013, before settling into its current complex of disused warehouses. It now hosts a café, library, art gallery, and a sartoria migrante—a workshop where mostly West African migrants make whimsical fashion items from recycled materials for sale in local markets. It is called Karaló Roma, from the word for “tailor” in the Mandinka language. Space is also provided for a group that offers legal counseling for migrants.

Communia is hoping to gain legal rights to occupancy of the space, which is still formally owned by the proprietors who abandoned it.

Even amid the related threats of repression and gentrification, there is still a palpable sense of social ferment in San Lorenzo. Among the numerous CSOAs is a palestra popolare, or popular gymnasium where local rads can stay in shape for street actions. Radio Onda Rossa (Red Wave), a pirate station rooted in the Autonomist movement of the ’70s. has been on the air for almost 40 years. And in a narrow storefront on Via dei Campani, near ancient walls dating to Rome’s imperial era, is Anomalia anarchist bookstore. Founded in 1984, its private lower level houses the archives of Errico Malatesta’s Italian Anarchist Federation, dating back to the 1940s.

Museum of the Other and Elsewhere
Further east, in an outlying industrial area along the Via Prenestina, is one of Rome’s most public occupazioni, the Metropoliz. This won fame on the underground film circuit with its 2011 cinematic project Space Metropoliz, about squatters colonizing the Moon (a nod, if not an intentional one, to Ursula K. Le Guin’s novel The Dispossessed). Filmed in the cavernous ex-factory, the flick is on YouTube, and has screened at film festivals in Italy and elsewhere.

Every vast room in the rambling former salami plant is filled with bizarre artwork—murals on the walls, huge sculptures hanging from the ceilings, surreal, menacing or idealistic. Many are crafted from found industrial debris.

But the upper floors are inhabited by mostly migrant families, laundry hung to dry in the corridors. In the canteen, where a big circle-A hangs above the kitchen doorway, a family of Peruvians is cooking up lunch fare: the typical Italian proletarian dish pasta fazool, and the traditional Peruvian specialty, papas a la Huancaína.

Giorgio de Finis, who directed the film and co-founded the squat, sits down with me over coffee in the canteen. “Many squats in Europe are inhabited by artists,” he says. “But this one is inhabited by families. Artists initiated it, but with the political intention to advance what we call the diritto a la città—the right to housing.” (Literally, the right to the city.)

The salami factory was abandoned in the ’80s, and the space was taken over in 2009 by a squatter movement called the Blocchi Precari Metropolitani—the Precarious Metropolitan Blocs, a reference to the uncertain social status of the disenfranchised. The year after the film came out, it was opened to the public as the Museo dell’Altro e dell’Altrove di Metropoliz, or MAAM—the Museum of the Other and the Elsewhere. Amid the droves of alterno-tourists groking on the artwork, live some 200 migrants—from Peru, Morocco, Sudan, Ethiopia, Eritrea—as well as some Italian families left unemployed and homeless in the wake of the 2008 economic crisis, and several Romani families, otherwise forced to live in camps under what de Finis calls a “policy of ghettoization.”

But by the time the squatters moved in, the ex-factory had already been bought by the Salini Impregilo construction firm, which wants to build an apartment complex on the site. De Finis emphasizes that this development would not serve the communities now living in the Metropoliz.

Irene di Noto, another Metropoliz co-founder, sees the project as an experiment in a new form of social organization. “We want to go beyond the dichotomy between public and private,” she says. “What we call ‘public’ today is space not yet appropriated by the private. We want to establish space outside that dynamic—a space managed by citizens, as well as accessible to citizens.”

Acknowledging that Metropoliz has a weak claim to the space under the law, she says, “We speak not of legality but legitimacy—serving the bene comune [common good].”

Di Noto believes there are some 6,000 people living in some 100 squats across Rome, and criminalizing them will not address the social pressures that brought about this reality. “Rent control was abolished throughout Italy in the ’90s, and public housing has been sold off since then; there is less each year. Salvini’s ‘Italians first’ rhetoric and security law facilitate evictions.”

One of the slogans seen on banners at the rally in Plaza San Silvestro was SPEGNI LA MICCIA—”douse the fuse,” with the implication that the Salvini Law would put the country on a countdown to social explosion. Now that it has passed, the challenge facing Italy’s squatters is greater than ever.

Update: Matteo Salvini was removed from power as his coalition fractured and a new government was formed in September 2019. The new government brings together Salvini’s former coalition partners, the populist Five Star Movement, with the center-left Democratic Party. It remains to be seen if the new government will enforce the Salvini Law.

Portions of this article previously appeared in the Spring issue of Fifth Estate and the June 17 edition of The Villager.

Photos by the author. In bottom photo, Giorgio de Finis on far left and Irene di Noto in center.