This May Day season has been a real political eye-opener for me.

On International Workers' Day itself, I was part of the Free Syria bloc at the Foley Square rally—consciously dissident, in repudiation of the growing flirtation by elements of the American left with the genocidal dictatorship of Bashar Assad. In our contingent was a woman from Syria's Idlib—capital city of the province of that name, where last month the regime carried out a deadly chemical attack on the town of Khan Shaykhun.

It was heartening that we got a lot of positive reactions from the crowd. One young woman who gave us the thumbs-up had a handwritten sign reading: "I am the product of Mexican & Syrian immigrants. This is what an American looks like."

But some other moments were not so heartening—indeed, downright disturbing.

The Foley Square rally (organized by a coalition led by the city's Central Labor Council) was crashed by two distinct groups of right-wing provocateurs. The first was a very pugnacious, openly pro-Trump crowd, wearing red "Make America Great Again" caps. But, bizarrely, they otherwise looked like hipsters just off the L train from Bushwick—some even had dreadlocks or hipster-type tattoos. One was wearing a motorcycle helmet, looking like a Black Bloc anarchist ready to rock and roll—but threatening the protesters, not the police. They were held back at the periphery of the rally by a cordon of spontaneously mobilized attendees, cops separating the two groups.

Even creepier was the crew of neo-Nazi types who were actually able to infiltrate the crowd, due to their greater subtlety. They looked like a typical Black Bloc—except that their black flag showed an eagle with a fasces in its claws. The fasces, a bundle of rods bound together around a battle-ax, was a symbol of Imperial Rome that was revived by Mussolini's Fascist Party. It took a while before attendees got wise to them and they retreated in the face of jeers. 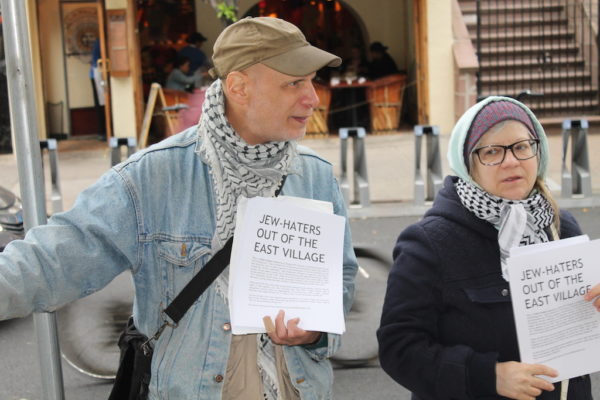 A little research revealed that this was an outfit called Vanguard America. Their Web site, with the odious name "Blood & Soil," rails both against the "globalist establishment" and immigrants who threaten America's "Whiteness."

They reminded me of the oxymoronic "National Anarchists" (sic), who have long sought to insinuate themselves in New York's anarchist scene. These deeply confused anarcho-fascists (who mix up "racial separatism" with class-war talk) try to crash the Anarchist Book Fair every May. This weekend, however, they thankfully stayed away from the affair at Judson Memorial Church—perhaps put off by the rain, or tired of being barred entry.

That was a relief. But the growing confusion on the left—the blurring of the line between radical left and populist right—alarms me.

Two weeks ago, I opened The Villager to read Carl "Angry Buddhist" Rosenstein saying he believed the Khan Shaykhun chemical attack was a “false flag” operation to justify US air strikes on the Assad regime.

There is nothing to suggest this. Human Rights Watch just issued a report, "Death by Chemicals," flatly blaming the Khan Shaykhun attack on Assad, and finding that it was but one of several regime chemical attacks in recent weeks. Insurgent forces, which have to worry about the hearts and minds of the populace, never commit mass murder on their own people as a provocation. In contrast, counterinsurgency forces all too often resort to mass murder to terrorize targeted populations. Assad is the only plausible suspect, and to cast the blame elsewhere in the absence of positive evidence is irresponsible in the extreme. 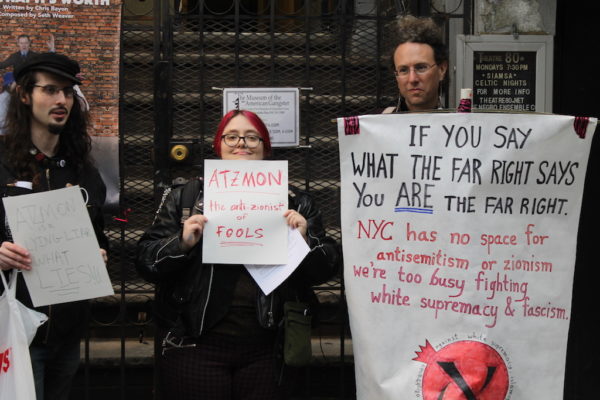 Yet this "false flag" speculation is the overwhelming response of the "anti-war" left. That Trump was able to win the support of many Syrians with his air strikes on the base the attack was launched from is indeed a political tragedy. But the left's betrayal of the Syrians is part of the problem.

Then there was the dust-up over the appearance by notorious Jew-hater Gilad Atzmon at Theatre 80 on St. Mark's Place. The gig was April 30, and I was among those picketing outside.

I was deeply chagrined that sharing the stage with Atzmon (who has a website full of Holocaust revisionism and recycles every anti-Semitic trope about Jews and world domination) was attorney Stanley Cohen, long a hero on the Lower East Side for his representation of squatters and activists in the '90s. (He has more recently been representing Hamas figures.)

Atzmon next moved on to California, where he spoke just days later at an Orange County confab of the Institute for Historical Review, a Nazi-linked pseudo-scholarly body and America's foremost voice of Holocaust denial.

Similar to the "National Anarchists" demanding entry to the Book Fair, Atzmon's supporters browbeat me and my fellow protesters with lectures about "free speech." I'm really tired of fascists whining about "free speech," as if we have a responsibility to give them a platform. On the contrary, we have a responsibility not to. Atzmon can go harangue the neo-Nazis at the Institute for Historical Review all he likes. If he comes to my neighborhood, I'm going to protest, and that's my free speech right.

If you cheered on the protests that shut down Ann Coulter and Milo Yiannopoulos in Berkeley, you should certainly support our peaceful picket outside Theatre 80.

But the hypocrisy about free speech is a small issue compared to the underlying political logic at work here. In Europe they call it "red-brown politics"—the notion of a left-fascist alliance against capitalism and the West. It requires but the most cursory review of history to realize what a disastrous error this is.

Recall that Benito Mussolini started out as a left-wing socialist with anarchist leanings, who led an abortive general strike in Italy in 1914. Just eight years later, he became Europe's first fascist dictator, and leftist revolutionaries quickly filled his torture chambers. Hitler replicated a similar strategy, adopting a pseudo-left posture with his "National Socialism," and appropriating elements of the disaffected into his populist Brown Shirts—before crushing them in the Night of the Long Knives after he consolidated power.

We’ve seen this movie before. It didn't end well, especially for the left.

This story first appeared May 17 in The Villager.

Manchester, xenophobia and the left's complicity
CounterVortex, May 25, 2017

DONALD TRUMP: A FASCIST BY ANY OTHER NAME
by Bill Weinberg, Fifth Estate
CounterVortex, April 2017