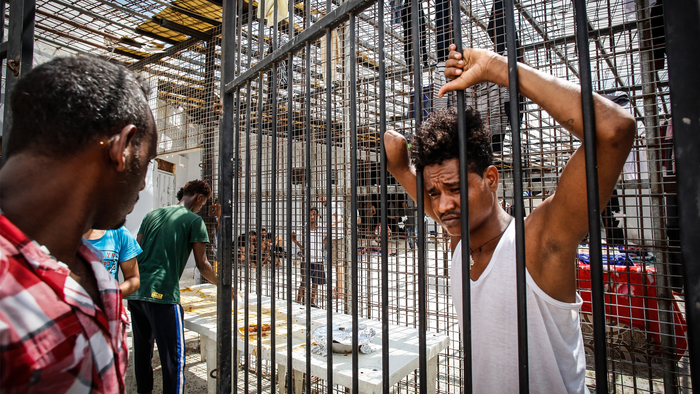 The UN says it is unable to help most residents of an overcrowded refugee center in the Libyan capital it once touted as a safe haven. To encourage people to go, it is offering money and aid—and even telling them they won’t be able to register as refugees to leave the war-torn country if they remain. Originally intended as a temporary residence for a small fraction of refugees—just those already vetted by the UN’s refugee agency (UNHCR) and scheduled for evacuation or permanent residency in other countries—the Gathering and Departure Facility (GDF) now has some 1,150 residents, well over its stated capacity. Most arrived over the last eight months of clashes in Tripoli, including 900 who UNHCR says entered “informally”; some even bribed their way in. As the fighting has intensified, numbers in the center have risen and many of the people inside are hoping for—or demanding—a way out of the country, even though the UN says it can’t offer that to everyone.

A flyer UNHCR began distributing late November at the GDF offers food, cash, primary healthcare, and medical referrals to those willing to leave. “You will not be considered for evacuation or resettlement if you stay,” stresses the flyer—the latest in a series of attempts to encourage those who entered informally to leave. Aid, including cash, was also offered earlier. About 100 people have taken up the offer since late November, but others have also likely entered the facility since then.

A source within UNHCR Libya, who requested anonymity, criticized the effort to push people out, calling it tantamount to “blackmail” to promise them help if they go and threaten their ability to secure refugee status if they do not.

The agency has defended its actions. UNHCR Special Envoy for the Central Mediterranean Situation Vincent Cochetel pointed out that there are only two locations in Libya, both in the Tripoli area, where people can officially register their claim as a refugee with UNHCR, and the GDF is not one of them. Cochetel said the agency can no longer provide for or protect the people inside the GDF, given that it has become overcrowded and dangerous.

“We believe the urban environment is safer for them, as long as they have a roof over their heads,” he said, adding that his agency provides various services in Tripoli, where the vast majority of migrants already live and rent accomodations.

UNHCR “is not in charge of the GDF,” and never was, according to a spokesperson, who said that the center is under the jurisdiction of Libya’s Ministry of Interior, which allows UNHCR and a local NGO, LibAid, to provide services there, including healthcare and food.

But it was the refugee agency that proposed the project, and a statement released after the GDF’s opening late last year said the facility is “managed by the Libyan Ministry of Interior, UNHCR, and UNHCR’s partner LibAid.”

According to internal UN documents and several sources, the $6 million facility—paid for by international donors—has now become unsanitary and is in disarray.

How it got this bad
There are more than 600,000 migrants in Libya, including 46,000 registered refugees and asylum seekers. Some came to work, but others aim to make their way to Europe, through a country that has become notorious for the rape, abduction and extortion of migrants, and for squalid detention centers run by militias and gangs. The Triq al-Sikka migrant detention center is across the street from the GDF, and some people have allegedly paid guards to pass between the two facilities.

Originally intended as a way-station for those on their way out of Libya, a UNHCR press release issued last December called the then-new GDF was a place to “bring vulnerable refugees to a safe environment while solutions including refugee resettlement, family reunification, evacuation to emergency facilities in other countries, return to a country of previous asylum, and voluntary repatriation are sought for them.”

The GDF is no longer the gleaming facility shown off in promotional videos and photos when it opened a year ago, when families posed with their packed bags, and kids smiled in a playground.

An internal UNHCR report from early November, obtained by The New Humanitarian, paints a starkly different picture, as do the numerous accounts of those living inside the center. “Sewage water flooded days ago,” the report says, adding, “the toilets in all the housing are extremely dirty [and people] are complaining of the smell.” According to the report, some people had tuberculosis, scabies had begun to spread, and “food is stored in bad conditions.”

Some of this may be due to overcrowding, although the GDF’s capacity is not entirely clear: last December UNHCR said the facility could hold 1,000 people, but that number was adjusted in subsequent statements—in September, it was 700, and in October 600.

Numbers at the center began to increase not long after it opened, although roughly in line with capacity until fighting broke out in Tripoli—with the internationally recognized government in Tripoli and the militias that back it on one side, and eastern forces led by general Khalifa Haftar on the other.

Thousands of people found themselves trapped in detention centers on front lines, and UNHCR began evacuations to the GDF, including some of the “most vulnerable people” who had survived a July double air-strike on a center called Tajoura that killed 52 people.

From The New Humanitarian, Dec. 10

See our last posts on the GDF, Khalifa Hifter’s Tripoli offensive, and the Tajoura attack.