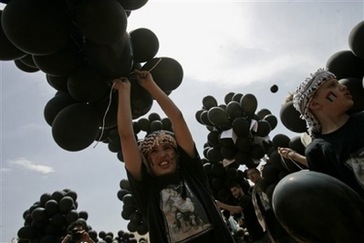 On May 15, thousands gathered in Ramallah to mark the 60th anniversary of al-Nakba. Crowds marched from refugee camps around Ramallah, converging in the center of the city for speeches and traditional dancing. At Kalandia camp, thousands of black balloons were released, in coordination with similar releases in Bethlehem and Jerusalem—one for every day of the Palestinian dispossession. Attached to the balloons were notes from children around Palestine expressing their hopes for the future.