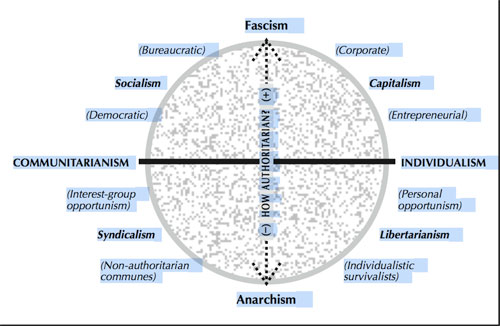 Libertarians are beloved of charts that place individuals and ideologies along two intersecting axes: left/right and libertarian/authoritarian. The most popular is the Nolan Chart, which uses the terms “liberal/conservative” and “libertarian/statist.” (You can place yourself on the Nolan Chart with this “World’s Smallest Political Quiz.”) The above chart, designed by Mitchell Halberstadt in the San Francisco Bay Area, is in my opinion superior, allowing the viewer to place him or herself more precisely. It uses the terms “communitarianism/individualism” and “anarchism/fascism.” I would place myself in the lower left quadrant of the chart, with anarchist (libertarian) and communitarian (left) leanings—somewhere between the designators “syndicalism” and “non-authoritarian communes.” The Democratic and Republican parties would both be in the exact opposite (upper right) quadrant—around the designator “corporate” (the Republicans slightly closer to the fascist pole; the Democrats, with their more communitarian instincts, slightly closer to the circle’s center). The capital-L Libertarians (free-market but liberal on social issues) are in the lower right quadrant. This is ostensibly where Ron Paul belongs—but his equivocation on civil rights and abortion rights (in the long-familiar guise of “state’s rights”) may actually place him outside the libertarian quadrant, closer to the fascist pole. The folks at New Centrist argue that Ron Paul is not truly libertarian but “paranoid populist”—a distinct “style in American politics” first identified by Richard Hofstadter.