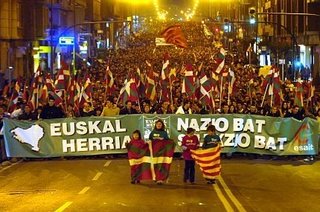 Igor Portu has testified before judicial authorities that he was beaten by Civil Guard agents while being held hooded in a van after his arrest Jan. 6, and driven to a deserted riverside port near Arrasate where his head was held under the water. He was threatened with death and being thrown into the river before he was taken to the Civil Guard headquarters at Intxaurrondo. Portu reported “very strong blows to the ribs and chest.” (EiTB24, Jan. 11) News accounts say Portu was hospitalized for fifteen hours and treated for a punctured lung before being taken to Martutene prison in Donostia-San Sebastián. (EiTB24, Jan. 11) Portu’s family members who visited him in Zuera prison, where he has been transfered, confirmed that he had signs of maltreatment, including a black eye and “visible marks on his body.” (Gara, Jan. 14) Authorities say Portu and Sarasola were responsible for the December 2006 Madrid airport bombing. (EiTB24, Jan. 9)

Meanwhile, ETA has claimed responsibility for two small bomb attacks in December 2007—against a court in Sestao near Bilbao on the 16th and against the offices of the ruling Spanish Socialist Workers Party (PSOE) in Salamanca on the 24th. In a Jan. 1 communique claiming the attacks, the ETA accused the Spanish government of instating a “situation of exception” and seeking to crush the Basque movement through “state terrorism.”

25,000 marched in Bilbao Dec. 29 to demand the right for Basques to have national sports teams, and to play in international competitions. The rally, called by the Basque sports association ESAIT, was led by a group of children carrying the Basque national flag. The leading banner read “Euskal Herria, a nation, a team.” (Irish Basque Solidarity Committees, Jan. 8)

See our last posts on Spain and the Basque struggle.