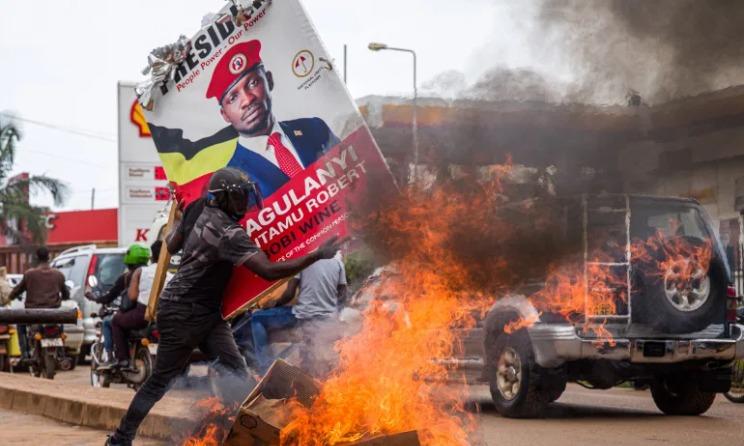 At least 16 people have been killed in protests in Uganada since the arrest of two leading opposition candidates in upcoming presidential elections Nov. 18. One of the detained candidates, popular musician-turned-politician Bobi Wine (real name Robert Kyagulanyi), was accused of breaking COVID-19 restrictions at campaign rallies. Both he and fellow candidate Patrick Amuriat Oboi were detained while on their way to attend rallies. Four candidates, including two former military generals, have suspended their campaigns following the arrests. The military has been deployed to put down the protests in Kampala and other cities. Protesters are tearing down and burning campaign billboards of incumbent President Yoweri Museveni who has been in power since 1986, before the majority of Ugandans were born.

A post on Bobi Wine’s Twitter account reads: “More than 24 hours after his brutal arrest and detention in Nalufenya, Bobi Wine has been denied access to his lawyers and his medical team. Only the army and police officers have access to him. All persons of good conscience must condemn the violation of his rights. The regime accuses him of holding big meetings and processions. On the other hand, general Museveni continues to hire crowds to hold processions and rallies everywhere! The regime is in so much panic. COVID-19 is an excuse.” (Quartz Africa, Music Africa, NYT)