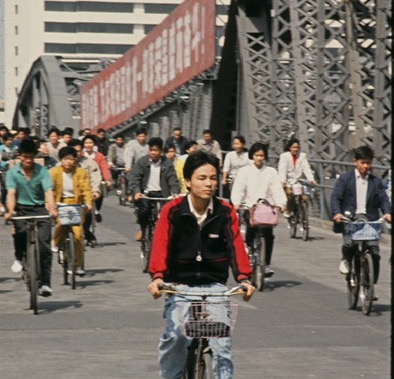 Legendary transportation activist George Bliss will be presenting a slideshow and hosting a discussion of his 1991 trip to China at the Museum of Reclaimed Urban Space (MoRUS) in New York City on Friday Dec. 9.

What would NYC be like if we got rid of cars and everybody rode bikes? In 1991, filmmaker Ted White and bicycle researcher George Bliss visited Guangzhou, China (then pop. six million). Only one in a thousand owned cars. Chinese-produced bikes cost about $50. There was no theft because cheap attended bike-parking was everywhere. Riding en masse was fun, and traffic flowed safely and efficiently with almost no red lights. The term “critical mass“—first applied to this phenomenon by Bliss in White’s film Return of the Scorcher—soon became a rallying cry in the global bike movement.

Bliss will present slides from among 400 photos taken during that trip. While that China is long gone, its legacy points to the city we could yet have, including here, half a world away.