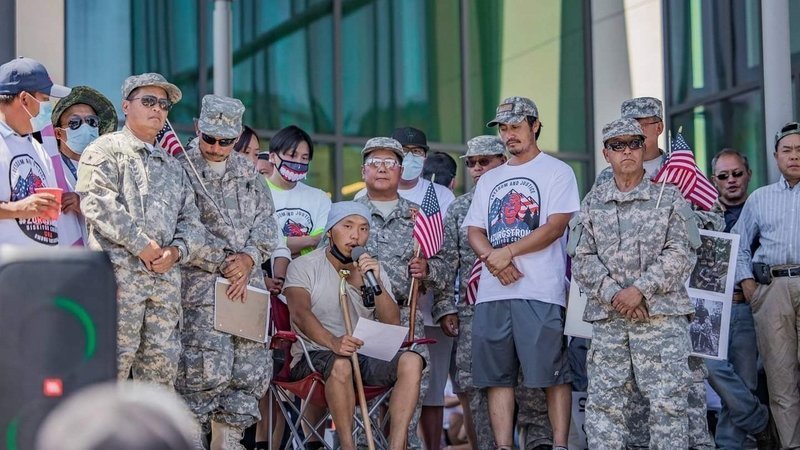 The government of Antioch, Calif., in June issued a public apology for the anti-Asian pogrom in the Bay Area city in 1876, in which Chinese residents were driven out, their homes put to the torch. It was a part of the same wave of violence against California’s Chinese community as the Los Angeles massacre of 1871 and the San Francisco pogrom of 1877.

But even as Antioch apologizes for this ugly past, persecution of Asians appears to continue today in more remote parts of the state.

A disturbing escalation is reported in California’s far-north Siskiyou County, where Hmong immigrants from Laos have been getting in on the cannabis economy—sparking a xenophobic backlash. Conservative politicians are making hay of the tensions, while the local Hmong are starting to stand up and protest.

Tou Ger Xiong is a Hmong professional comedian and an activist with the Coalition for Community Relations, in Minneapolis, where there is a large Hmong presence. He was recently in Siskiyou County—where tensions have this summer exploded into demonstrations, litigation, and a violent incident that left a Hmong man dead at the hands of law enforcement.

Xiong notes that his people were recently in national news for a positive reason. “When Suni Lee became the first Asian American to win Olympic gold, people were asking ‘Who are the Hmong?’”

He relates how some 300,000 Hmong indigenous people came to be living in the United States. “We fought as the CIA’s secret allies in Laos for 15 years. The US was trying to disrupt the Ho Chi Minh Trail, which passed through Laos. We fought so that American troops wouldn’t have to be sent in. Boys as young as 15 years old were told they were allies of America and sent to fight. Many Hmong died in that war, and saved American lives in the process.”

But the Hmong paid for this after the communists took over Laos in 1975. “After the war, we were enemy number one in revenge for helping the Americans, and fled across the border to refugee camps in Thailand. Many Hmong came to the United States through the UN refugee resettlement program. We mostly settled in Minnesota, Wisconsin and California.”

Xiong says in recent years Hmong have been migrating from Fresno up to remote and rugged Siskiyou to purchase cheap land—and cultivate cannabis. “We can grow anything in any conditions, we’ve been practicing farming for thousands of years,” he says.

However, despite cannabis “legalization” in California, enforcement and eradication of unlicensed plots continue—and in Siskiyou, all outdoor cultivation is banned by county ordinance. Local Hmong charge that they are the targets of discriminatory enforcement.

Tensions between the Hmong and law enforcement reached a grim climax on June 28, when Soobleej Kaub Hawj, a 35-year-old Hmong man, was shot dead by police during the evacuation of local communities due to the devastating Lava Fire, which has destroyed many homes in the county.

County seat Yreka saw a rare protest demonstration on July 17 over the killing. At the rally, an attorney for the Hmong announced a federal lawsuit against the Siskiyou County Sheriff’s Office and California Department of Forestry & Fire Protection—claiming they violated Hawj’s constitutional rights to due process, equal protection, and protection from unlawful search and seizure.

The Sheriff’s Office has confirmed that officers shot and killed Hawj during evacuation of the Mount Shasta Vista Subdivision, southeast of Yreka—an area notorious for unlicensed cannabis grows, and a crackdown by county authorities.

According to the Sheriff’s statement, officers assisting in the evacuation stopped a pickup truck that was going east on Shasta Vista Drive, away from the subdivision, and toward the intersection with County Road A-12, where firefighters had established a staging area. At A-12, officers directed the driver to turn north, away from the evacuation zone. According to the statement, the motorist ignored those directions and instead turned southbound.

“While the law enforcement officer was communicating with the driver, the driver raised his hand and pointed a semi-auto handgun at the officers,” the Sheriff’s Office said, according to an account on Southern Oregon’s KDRV. The officers opened fire.

“Fire personnel quickly administered medical aid to the driver of the vehicle; however, he did not recover, and was pronounced dead at the scene,” the statement concluded.

Folks at the Yreka protest contested this version of events. They said that eyewitnesses at the time didn’t report seeing Hawj draw a gun. They were outraged that 60 rounds were fired into Hawj’s truck, while his wife and three children witnessed the shooting as they evacuated behind him in another vehicle.

Authorities have also seemingly dropped claims that Hawj fired first—or even got a shot off at all. “Based upon preliminary information, it appears that there might have been a couple rounds fired from the suspect’s firearm,” Sheriff Jeremiah LaRue initially told the Sacramento Bee—a claim that has not been repeated.

It likewise raised eyebrows that the Sheriff’s Office did not identify Hawj by name until July 15—more than two weeks after the shooting. And no dash-cam or other footage of incident was released. This led Tou Ger Xiong to say in a social media statement, “There’s something suspicious about his death.”

Hawj had recently moved to Siskiyou from Kansas City to help his family. Authorities have not determined if he was growing cannabis, and it is unknowable how many of the county’s some 4,000 Hmong are involved in cannabis cultivation.

Kirk Andrus, the Siskiyou District Attorney, told the Daily Beast it is unclear whether Hawj was a part of the “illegal cannabis cultivation industry,” but that the question is irrelevant to his investigation. “The officers will receive no benefit from what he may have done for a living,” Andrus said. “We will follow the evidence wherever it leads without regard to outside factors.”

Hmong activist Zurg Xiong launched a public hunger strike on the steps of the Yreka courthouse to demand that the investigation into Hawj’s shooting be taken out of the hands of local authorities. He broke his fast after 19 days on July 23, when California Attorney General Rob Bonta agreed to consider an investigation into the killing.

But DA Andrus is insisting on pursuing his own investigation.

Four officers were apparently involved in the shooting—one from the Sheriff’s Office, two from the local police department in the town of Etna, and one from the California Department of Fish & Wildlife. Andrus said, “I have not released the names of the involved officers and will not do so until my findings are made public.” He did not make clear if the four officers are still on duty.

Andrus did say that a “firearm was recovered from inside the vehicle of the decedent.” Asked if Hawj got a shot off, he said: “This information will be released when I make a public report of the incident. Until the investigation is complete and I determine whether any officer should face criminal charges I cannot ethically release this information.”

Tou Ger Xiong says another source of tension in Siskiyou is “racist ordinances and policies targeting the water supply of Hmong families. Water for basic needs like showering and cooking is being denied.”

The most recent such emergency ordinance was passed by the county in May, both prohibiting water trucks from delivering to specified areas and barring use of pumped groundwater in off-parcel plots. It is portrayed as a response to unlicensed cannabis growing and the long drought in the region. But activists charge it is specifically targeting areas such as the Mount Shasta Vista subdivision where Hmong have settled.

Legal challenge to the ordinance is pending. On Aug. 6, US District Judge Kimberly Mueller in Sacramento ordered Hmong litigants and the county to enter into mediation to “ensure people living in the Mount Shasta Vista subdivision have water to meet their basic needs while the court considers the pending motion for a preliminary injunction.”

Emotions were further enflamed July 20, when US Rep. Doug LaMalfa, a Republican, posted videos to YouTube showing himself at the controls of a bulldozer, joining with Siskiyou deputies to demolish an unlicensed cannabis greenhouse. In his patter to the camera, LaMalfa said: “I love the smell of diesel power in the afternoon. It smells like victory.” He was obviously referencing the “napalm in the morning” quote from the Vietnam War movie Apocalypse Now.

Tou Ger Xiong has little patience for such talk. “People have been growing cannabis there for decades. Now Hmong start growing, and they say they are bringing gangs and crime into the community. Targeting a specific ethnic group is mean-spirited.”

Versions of this story also appeared in The Progressive and Cannabis Now.

Photo of Zurg Xiong on hunger strike with “secret army” veterans via Change.org