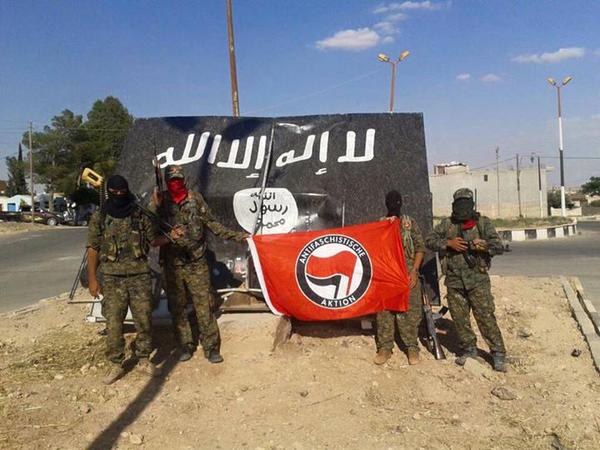 Kurdish fighters displaying the anti-fascist flag in front of an ISIS billboard in newly liberated territory outisde Raqqa, Syria. In a perverse historical irony, two Spanish volunteers who went to the region to fight ISIS in an "International Brigade" were… Read moreAnti-fascist flag raised as Kurds advance on ISIS

Two Spanish volunteers who went to Iraq to fight ISIS in an "International Brigade" were arrested upon their return and face charges of membership in a "terrorist organization."

ERBIL/DUBAI — A month after fleeing his home in Qaraqosh, the largest Christian town in northern Iraq’s Nineveh province, to escape the advance of militants from the so-called Islamic State (IS), Basim Mansour Yohanna received a telephone call. It was a former colleague, a Sunni Arab, who told the Assyrian Christian he was standing inside his family’s apartment, preparing to ransack it.

“I won’t go back with Sunnis there,” the 55-year-old said angrily. “When I see them, it’s like they are stabbing me in the stomach. They all betrayed us, we cannot trust any of them.”

Huda Salih Marky, a member of the Yazidi religious community from Kocha, also in Nineveh, told IRIN how she was captured by IS and forced to work as a domestic servant in Mosul for a militant for several months, before being sold for ransom. “Yazidis will not be safe here in future, they can’t stay in Iraq, the best thing is to emigrate to a country where there are no Muslims,” she said.

These views may be extreme, but they are not uncommon.

Vietnam tilts to US in Pacific ‘Great Game’

Vietnam's paramount leader Nguyen Phu Trong meets with Obama at the White House, as the US and China play a dangerous game of chicken over disputed islands.