Venezuela gets a ‘birther’ conspiracy theory

Venezuela’s opposition is distributing a supposed copy of President Maduro’s birth certificate, showing that he was born in Colombia. But Colombia dismisses it as a crude forgery. 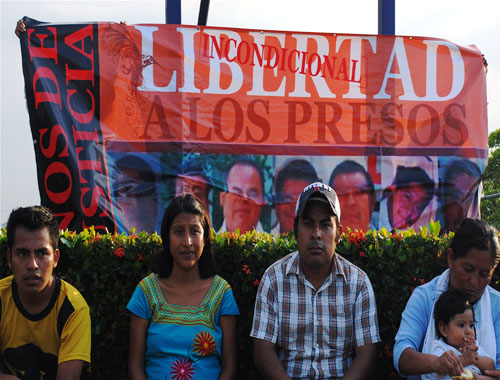 After spending nearly 17 years in the same prison cell just outside of Oaxaca City, seven indigenous Loxicha political prisoners were transferred in June—twice. The seven, accused of collaboration with the Popular Revolutionary Army (EPR), were first taken to Oaxaca’s… Read moreIndigenous Oaxacans in Mexico’s private prisons

by Kristin Bricker and Santiago Navarro, Upside Down World

After spending nearly 17 years in the same prison cell just outside of Oaxaca City, seven indigenous Loxicha political prisoners were transferred in June—twice.  The transfers, which enraged and frightened their families and supporters, were part of a nationwide shuffle of existing prisoners to fill beds at newly opened facilities that were financed by Mexican and United States drug war money.

The prisoners, Agustín Luna Valencia, Eleuterio Hernández Garcia, Fortino Enriquez Hernández, Justino Hernández José, Abraham Garcia Ramirez, Zacarias Pascual Garcia López, and Alvaro Sebastián Ramirez, are Zapotec indigenous men from Oaxaca's Loxicha region, one of the state's poorest and most marginalized. The seven Loxichas are accused of participating in the Aug. 29, 1996, Popular Revolutionary Army (EPR) uprising in la Crucecita, Oaxaca, in which 11 government agents were killed. The indigenous men say they were tortured into signing hundreds of pages of blank paper that were later filled in with confessions. The Loxichas were convicted of murder (of the federal agents), terrorism, and conspiracy, and they were sentenced to up to 31 years in prison.

After a lengthy dispute with global mega-firm AngloGold Ashanti, the people of the central Colombian town of Piedras passed a referendum to halt the company's operations.

‘We have made mistakes, some serious’: FARC

FARC commander “Pablo Catatumbo” issued a public statement apologizing for “mistakes,” but also called on the US, Israel and other governments to apologize for funding the war.