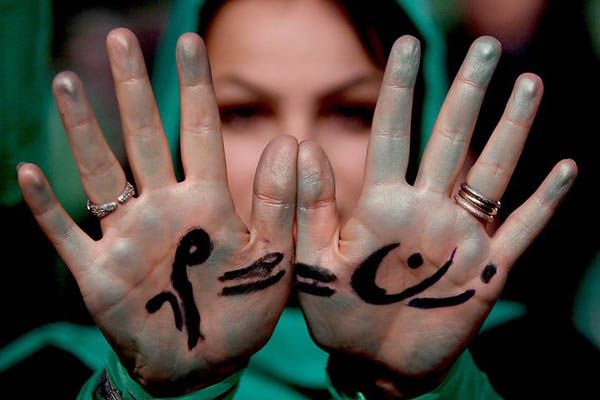 A protester for women’s equality in Tehran. As we approach the June 2013 Iranian presidential election, the real frontrunners of the 2009 election, as well as many young activists, remain in prison. But several defining issues continue to fuel the grassroots… Read moreWhither Iran’s democratic opposition?

As we approach the June 2013 Iranian presidential election, the real front-runners of the 2009 election, Mir-Hossein Mousavi and  Mehdi Karroubi, as well as  Mousavi’s wife, Zahra Rahnavard—all of whom came to be known as the leaders of the reformist Green movement—continue to languish under house arrest.  Many young opposition activists,  feminists,  and ethnic activists who participated in protests against election fraud in 2009, or any activities deemed "seditious" by the regime, are also in prison.

Although the recent disqualification of two candidates, Akbar Hashemi Rafsanjani and Esfandiar Rahim Mashaei, from the election, is very significant and further reveals the intense power struggles within the regime, more significant are the defining issues which continue to fuel the grassroots discontent inside Iran. These issues are the following:

Mali’s government and the MNLA, at odds over whether army troops will be allowed into the rebels’ northern stronghold for upcoming elections, will resume talks in Burkina Faso.

A group of Israeli settlers destroyed over 100 olive trees in a Nablus village after spraying them with toxic chemicals, a Palestinian Authority official said.

Negotiators from Colombia's government and the FARC rebels signed an agreement on agrarian reform, calling for redistribution of illegally held or underused lands.