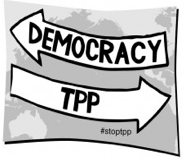 The secret Trans-Pacific Partnership is about to become even more secret, perhaps seen as a necessity in light of plans to make it easier for tobacco companies to sue while making health care more difficult to obtain.

The governments negotiating the draconian TPP still don’t want you to know what’s in it. Many of them issued cheery press releases congratulating themselves for the “progress” they made last week in Brunei. But you will search in vain for any information on what TPP negotiators are up to. They will now end their practice of “consultation”—the August 23 to 30 negotiations (the 19th round) are the last scheduled. Instead, negotiators will begin to meet in unannounced meetings.

In other words, not only is the text of the TPP to remain a secret, the negotiations themselves are to now be secret.

Formal negotiating rounds had occurred roughly every three months, but now negotiators henceforth will meet “intersessionally in the coming weeks” before meeting again at an Asia-Pacific Economic Cooperation (APEC) meeting in Bali, Indonesia, in early October. Although the good news is that, despite the efforts of several governments, most forcefully the Obama administration, it appears virtually certain there will be no deal to sign then.

The bad news is that obtaining details may become more difficult. The new, less formal format can reasonably be interpreted to mean that particularly harsh text is being discussed. Several of the 12 negotiating governments are balking at various proposals, but given that each remains inside the talks and issues content-free press releases, the secrecy shrouding the TPP text remains in place, with a stronger curtain apparently about to shut out any stray sunshine.
Yes to tobacco, no to medicine

The Obama administration has consistently pushed for the most draconian rules. Washington’s latest outrage concerns regulations on tobacco products, universally opposed by tobacco companies. Early drafts of the TPP included “safe harbor” provisions protecting national tobacco-control measures—such as package warnings and advertising and marketing restrictions—from corporate challenges. But the Obama administration has reversed course under tobacco industry and US Chamber of Commerce pressure, intending to severely limit the ability of signatory governments to maintain their laws.

The Office of the US Trade Representative said its counter-proposal would “contain a general exception for matters necessary to protect human life or health” and add a provision that a complaining “party” (that is, a corporation) must first meet with “health authorities…to discuss the measure.”

Note that there is nothing in the proposal that prevents a complaining “party” from suing to overturn a regulation following a discussion. And the “general exception” is meaningless as the arbitration boards that hear investor complaints (controlled by entities such as the World Bank) consistently rule that any environmental or safety rule that reduces a corporation’s profits be overturned. For example, Canada was forced to pay Ethyl Corporation $13 million and issue an apology because it had banned a gasoline additive that causes neurological damage and contributes to air pollution. This additive was already banned in the US, where Ethyl is based, but the chemical company claimed Canada’s ban “expropriated” its profits.

US trade negotiators can write with a straight face that their proposals “work together to preserve the right to regulate tobacco products domestically,” but health advocates aren’t laughing. The Campaign for Tobacco-Free Kids and four other health care advocacy groups issued a joint statement condemning the cave-in to the tobacco industry:

[T]his language is far weaker than [the] original proposal, would not cover lawsuits initiated by tobacco companies and would not provide nations that adopt strong tobacco control measures with the protection they need from tobacco industry challenges.

Already, tobacco companies, which must continually create new smokers to replace those who die, are not shy about using existing trade agreements to knock down regulations. The Campaign for Tobacco-Free Kids statement notes:

The tobacco industry and its allies in government increasingly use trade and investment agreements to challenge legitimate tobacco control measures, and have done so specifically against laws adopted in the U.S., Australia, Uruguay, Ireland, Norway and Turkey… Tobacco companies and several countries have filed trade challenges to Australia’s law requiring that cigarettes be sold in plain packaging, while Philip Morris International has used an investment agreement to challenge Uruguay’s tobacco control laws, including its requirement for large, graphic health warnings. These costly challenges are aimed not only at defeating tobacco control measures, but also at discouraging governments from enacting them in the first place.

Philip Morris is also suing Australia for damages because of tobacco regulations, despite the country’s High Court ruling that it has no right to sue. Philip Morris moved assets to Hong Kong to be able to sue Australia under a bilateral trade agreement, and the TPP would open the floodgates to similar suits.

At the same time, US intellectual-property proposals would make medicines more expensive through rules that would extend patents and data exclusivity periods for brand-name drugs, impeding trade in generic medicines, and putting new limits on how drug prices are set or regulated, according to the Council of Canadians. Already, Eli Lilly and Company, one of the world’s largest pharmaceutical companies, is suing Canada for C$500 million because Canada would not grant it two patents. Eli Lilly claims the denial is an illegal confiscation of profits under the North American Free Trade Agreement.

The Global Treatment Access Group, a coalition of Canadian civil society organizations, in a discussion of health issues, writes that the proposed TPP provisions concern public health policy and therefore do not belong in a trade agreement. These provisions would, inter alia:

regulate countries’ drug pricing programs to the benefit of patented, brand-name pharmaceutical companies, undermining the ability of governments’ public insurance programs to negotiate reduced prices from manufacturers… Undermining governments’ ability to manage costs of its public insurance schemes by ensuring value-for-money when it comes to pharmaceutical reimbursement is obviously of great concern.

What you don’t know can hurt you

The more TPP negotiating governments proclaim their transparency, the more opaque the talks. Here’s a sampling of what governments had to say after last week’s Brunei round ended. The US Office of the Trade Representative provided this happy talk:

Buoyed by the ministerial engagement and their commitment to actively guide the negotiations, negotiators advanced their technical work this round on the texts covering market access, rules of origin, investment, financial services, intellectual property, competition, and environment. They also made progress on the packages providing access to each other’s markets for goods, services, investment, financial services, temporary entry, and government procurement.

You’ll wait in vain for any details of said work. Apparently wishing to end any pretense of independence, the Australia Department of Foreign Affairs and Trade issued the same four-paragraph release, word for word. The New Zealand Ministry of Foreign Affairs & Trade couldn’t be bothered to issue a report at all, merely publishing the chief negotiators’ joint statement, which was similar pablum.

The Canada Ministry of Foreign Affairs, Trade and Development did manage its own statement, but, alas, is no more substantive than the others:

During the 19th round, negotiators built on the progress made to date in several areas, including on goods market access, rules of origin, investment, services, financial services, temporary entry, intellectual property, government procurement and environment.

No word from Ottawa, either, on what the negotiated text might include. The ministry did say that it saw no problem with the US reversal on tobacco.

Thus far, the only signs of resistance among TPP negotiators comes from Malaysia, which reportedly will not sign anything this year as it conducts a “cost-benefit analysis.” On August 27, Malaysia put forth a proposal to completely “carve out” tobacco regulations from the agreement. It is not known if any other countries have joined Malaysia in seeking to preserve tobacco regulations.

The Vietnamese newspaper Thanh Nien reports that the US is the only TPP negotiating country not a signatory to the World Health Organization Framework Convention on Tobacco Control, which mandates policies to reduce tobacco usage. Passage of the U.S. tobacco proposal would put Vietnam and the other countries in violation of their WHO obligations. So much for the “rule of law.”

In the meantime, legislators around the Pacific Rim continue to demand access to the secret TPP text. Two years ago, in 2011, the New Zealand government denied a hearing on the TPP asked for by 13 organizations and there is no indication that any hearing will be held. A Canadian opposition member of parliament, Don Davies of the New Democratic Party, has asked the government of Stephen Harper “to give Canadian MPs the same information that US Members of Congress have about the ongoing Trans Pacific Partnership negotiations.”

Perhaps Mr. Davies should aim higher, as few members of the US Congress have seen the TPP text, and then only because of loud demands and under condition that they not reveal any of the text in public. They haven’t.

Malaysia and, it is believed, New Zealand, are balking at US demands aimed at dismantling state-owned enterprises; New Zealand and Australia are resisting demands on dairy and sugar products, respectively; and Japan is likely to resist US demands that it open its borders for automobiles. And Chile’s former chief TPP negotiator recently resigned, expressing strong doubts about the wisdom of health-related proposals, although that country’s negotiating stands do not appear to have changed.

Another development that could delay any agreement is if Barack Obama fails to goad the US Congress into re-approving “fast track” trade authority. If such an authority is granted, Congress can only vote yes or no with no amendments allowed. But if Congress does not vote to give away its authority, the process is significantly slowed down because amendments can be made, which would require the text to go back to the negotiators. Activists believe Congress might vote on fast-track authority the first week of October.

Stopping the TPP will happen in the streets, however, not in legislative bodies. It is impossible to overstate the disaster that would occur from an implemented TPP: Labor and environmental laws would be outlawed as fetters on the right to maximum profits; national sovereignty would be a relic of the past; and smaller countries would have no control over the plunder of their resources by the larger countries’ multi-national corporations. Under the TPP, the task of governments, codified in law, would be to maximize corporate profits.

Such is the dystopia that awaits us unless there is a massive international movement against the TPP, and then to overturn existing “free trade” agreements.