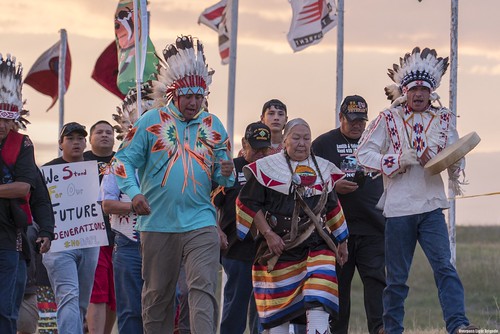 The largest multi-tribal gathering of indigenous peoples in North America in over a century is happening now at the Sacred Stone Camp in North Dakota. Leading the cause is the Standing Rock Sioux Nation. The Standing Rock Sioux and their allies are standing against construction of the “black snake” Dakota Access Pipeline (DAPL), slated to run under the Missouri River and through their historically sacred tribal sites. The tribe states it had not been properly consulted prior to construction of the DAPL, a requirement legally mandated by Executive Order 13175 (PDF). The order stipulates that: “[e]ach agency shall have an accountable process to ensure meaningful and timely input by tribal officials in the development of regulatory policies that have tribal implications.”

The Standing Rock Sioux Nation’s assertion that the Army Corps of Engineers, an executive agency charged with overseeing and granting pipeline permits, has failed to meet the clearly-enunciated requirement of meaningful consultation, makes this case one of the strongest Native American environmental justice legal claims in history. Environmental justice, a paradigm born of a merger between the civil rights and environmental movements, is unique in Native American communities. This unique status stems from the legal classification of tribes as domestic dependent nations, sovereign as political entities, yet still under the plenary authority of Congress, as per Article 1, Section 8 of the Constitution. The plenary authority of Congress over the tribes is a stretch at best, as Native Americans predate the Constitution. Nonetheless, the Supreme Court has established a solid judicial body of law giving Congress, and only Congress, the ability to act in good faith as wards over the affairs of Indian Country, such as the 1886 case of US v. Kagama.

The murky law governing Native American jurisdiction and right to self-determination has not been consistent, and is reflective of the political leanings of decision-makers in any given era. For example, in 1823 Chief Justice Marshall referred to tribes as “savages” in the landmark case of Johnson v. M’Intosh, affirming the doctrine of discovery. Despite the overtly racist language Justice Marshall flaunted in this opinion, it has never been overturned and is still cited today. Conversely, Congress has acquiesced to the need for greater legal protections in Indian country from time to time. One of the greatest examples of this acquiescence is found in the Native American Graves Protection and Repatriation Act (NAGPRA). The NAGPRA requires that excavation or removal of Native American cultural items be done under procedures set out by the Archaeological Resources Protection Act (ARPA) (PDF), and in tandem with careful consultations with the Tribe. One of the intended goals of NAGPRA was to encourage the in situ preservation of tribal archaeological sites, particularly those that contain burials or other cultural items.

The Standing Rock Sioux have made it clear that the proposed route for the Dakota Access Pipeline runs directly through sacred burial sites and artifacts. Together with their allies, they have been demanding their legal rights to consultation be observed. Standing Rock Sioux Tribal Chairman David Archambault II stated: “I am not asking that you stop this pipeline, I’m asking that you do a full EIS [Environmental Impact Statement].” Yet, just one day after Standing Rock Sioux nation filed a request for an injunction due to newly found culturally significant artifacts and sites, Dakota Access bulldozed through the land, and hired a private security force armed with attack dogs and mace to deter the Tribe from trying to halt construction. The owners of the Cannonball Ranch, where some of the contested area is located, buckled under and sold the land to Dakota Access in September 2016. This land sale was made both without consultation of the Tribe, and without regard to the full knowledge of the vulnerable sacred sites and artifacts buried beneath the surface there. This purposeful failure to meet the requirements of tribal consultation is a direct breech of law on the part of Dakota Access, and gets to the heart of environmental justice.

Environmental justice looks different in each marginalized community, and there are no one-size-fits-all problems or solutions. As discussed in their 2001 law review article “Racializing Environmental Justice,” Jen-L Lyman and Eric Yamamoto wrote that for Native Americans, environmental justice often revolves around the effects of land dispossession, culture destruction and loss of sovereignty rather than equality and integration. The effects of these colonial measures have directly caused many Native American communities to suffer under conditions of poverty, economic vulnerability, and limited political capacity. As a ward over the tribes, Congress has the ability and responsibility to enact legislation to their benefit. What good is this guardianship if the meager protections provided are ignored without penalty or recourse (as is in the case of Dakota Access)?

In addition to the violations of the ARPA and NAGPRA, the Standing Rock Sioux have suffered a legal and environmental justice violation by the failure of the government to adhere to the National Environmental Policy Act. NEPA requires federal agencies to evaluate effects of proposed federal agency actions on tribal interests. The Standing Rock Sioux Nation’s sole water source, the Missouri River, will be crossed under several times if the Dakota Access Pipeline is completed. As a people with an average annual income of $4,421 who primarily make their living off of cattle ranching and farming, the Tribe’s interest in the Missouri cannot be overstated. Still, there has not been a rigorous consultation process between the federal government and the Tribe regarding the potential environmental hazards of a pipeline affecting their water supply. In 2013 alone, the US suffered 7,662 spills, blowouts, and leaks across 15 states with pipelines. Such a spill in the area at issue could obliterate the only clean water supply to which the Tribe has access, and consequently endanger the lives of those working and living in the vicinity. Yet still, the requirement of meaningful involvement of the peoples has not been recognized.

Dakota Access has made clear its deliberate intention to violate the rights of the Standing Rock Sioux through its action; however, the Tribe continues to battle fiercely in opposition to such intentions. Unfortunately, the Morton County Sheriff’s Department is providing enforcement power to this intention: just this past week, over 21 water protectors were arrested while holding a prayer ceremony to protect the land and water. Now, the world is watching to see if the federal government will step up to honor its federal-trustee relationship with the Standing Rock Sioux Nation and demand their meaningful involvement in the decision-making process around DAPL—or if this will instead turn into another chapter to be written into American history books narrating one more tragic case of indigenous erasure.

Dayna Jones is a second-year law student studying environmental and Native Law at Lewis and Clark Law School in Portland, Oregon. She is participating in the International Environmental Law Project and is also currently interning at OPAL Environmental Justice Oregon.

This story first appeared Sept. 29 in Jurist. Used with permission.

HEARTLAND STANDS UP TO KEYSTONE
by Peter Gorman, Fort Worth Weekly
CounterVortex, May 2014