That’s what was repeatedly chanted, and what the big banner read, at the spirited rally of some 200 at Union Square the evening of Oct. 19. But this wasn’t about the depredations of dirty New York landlords or saving historic East Village buildings from being cleared to make way for a luxury hotel. The large type above these demands on the banner read: “Stand With Larung Gar.”

Larung Gar is the world’s largest Buddhist sanctuary, in a valley in the traditional region of Tibet—although today officially in the Chinese province of Sichuan. At the rally, activists stood with painted cardboard cut-outs representing the monastery or Buddhist academy there, and smaller outlying buildings. Other cut-outs represented a bulldozer and truck-mounted wrecking ball, both “driven” by activists wearing People’s Liberation Army uniforms. Sitting below the display were two monks in traditional robes, Tibetan flags draped across their shoulders.

Protest organizer Urgyen Badheytsang, who just arrived here from Toronto to work in the Students for a Free Tibet office on 14th Street, relates some of the history to me. The community was founded in the 1980s, when post-Mao China started to loosen up, by the lama Jigme Phuntsok, dedicated to preserving and reviving the Tibetan Buddhist tradition. It rapidly grew, with some 10,000 small cabins today lining the valley walls. These are what the Chinese government is now demolishing, claiming safety and overcrowding concerns. But Badheytsang doesn’t buy it.

“It is political,” he said. “China fears the growing influence of Larung Gar.”

Founder Phuntsok died shortly after the first demolitions and evictions at Larung Gar, 15 years ago. But now China’s authorities are proposing to demolish 5,000 homes at the site—fully half of the cabins. Residents are being offered cash compensation if they leave voluntarily, but few have taken the bait. There have been over 500 demolitions this year.

On July 20, a nun at Larung Gar named Rinzin Dolma hanged herself, leaving a statement saying she could not bear to witness the destruction of the sanctuary. Since then, two more nuns have taken their lives in protest of the demolitions.

And there may have been uglier methods still. Two years ago, a mysterious blaze badly damaged several structures at Larung Gar—amid a wave of apparent arson attacks on monasteries across the Tibetan region.

“China is guilty of genocide” and “Stop the genocide in Tibet” were other slogans on signs at the rally. Another read: “China: Stop forcing Tibetan nomads off their lands”—a reference to the forcible resettlement of traditional nomads in Tibet and Inner Mongolia, and the reduction of their ancestral grazing pastures. Speakers also mentioned destruction of Tibetan lands by mining and hydro-electric projects.

While protests for Larung Gar were registered in cities around world that day—from Tokyo to Toronto to Santiago to Dharamsala, India, seat of the Tibetan exile government—Badheytsang attached special importance to New York.

“China is coming to New York for the UN Human Rights Council vote this month,” he said. China, Russia, Saudi Arabia and Cuba all currently sit on the council, and are all up for another term. “China does not deserve to be on the Human Rights Council,” Badheytsang said. “It’s the perfect case of the fox guarding the chicken coop.” 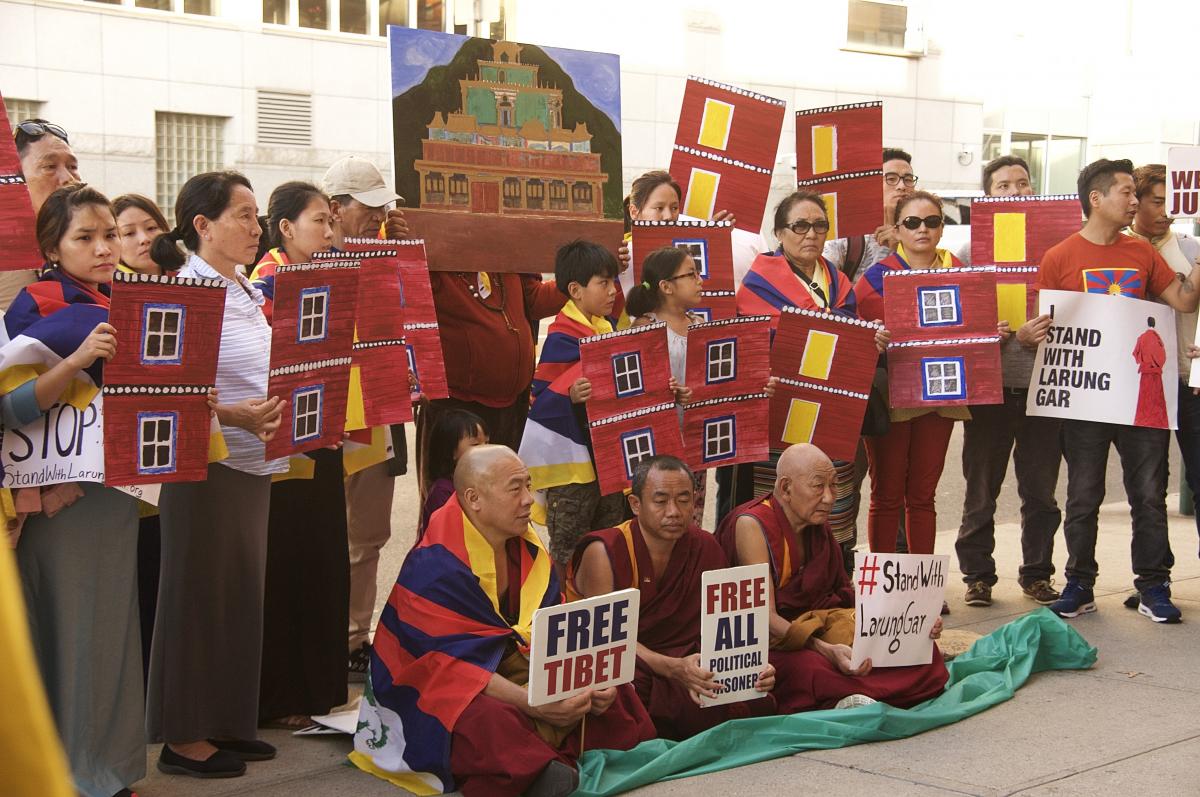 But some expressed skepticism about international intentions, even among nations that have supported the Tibetan cause. Ngawang Tharchin—like many at the rally, born in Nepal to a family of Tibetan refugees—now lives in Queens, and is general secretary of Dokham Chushi Gangdruk USA. That’s the organization of veterans of the 1960s Tibetan armed resistance movement, in which his father fought. While he emphasized the non-violent nature of the current struggle, he expressed pride at this legacy. And while he did admit the ’60s resistance movement received aid from the CIA, his speech to the rally contained a warning about US motives.

Said Tharchin: “The government has not genuinely supported our issue. In fact, we know we have been used in the past and they continue to use our issue as a play card whenever there is political and economic disagreement with China—which is not sending a good message to the Tibetan people who have struggled for their homeland for more than five decades…”

Another speaker was Jenny Wang—representing New York’s Taiwanese activist community. A member of the Keep Taiwan Free group that holds annual rallies for Taiwan to be admitted to the UN as an independent country, Wang noted the so-called “three T’s” that are forbidden topics in China: Tibet, Taiwan and the Tiananmen Square massacre of 1989. Wang told the crowd that activists must have their own three forbidden T’s. “We never get tired, we will never be timid, and we are not afraid of time. We will keep fighting as long as it takes.”

When I asked her why she, as a Taiwanese, joined with a Tibetan rally, Wang responded, “We have the same goal of self-determination. Enough is enough.”

And while I heard one participant in the crowd express support for Donald Trump as a “strong leader who could stand up to China,” this was by no means the majority position.

When I asked attendee Kunsang Palmo why New Yorkers should be concerned with Larung Gar, she tied her activism on behalf of the sanctuary with her sense of dignity as an Asian immigrant in Trump’s America. “Maybe you are legal, you are privileged, you don’t have to worry about hearing xenophobic comments on the street. But Trump has made all that much more visible. It is a similar atmosphere faced by Tibetans and protesters in China.”

This story first appeared Dec. 1 in The Villager.

IS TIBET A COUNTRY?
The Case for a Legally Independent State
by Michael C. van Walt, Free Tibet
CounterVortex, May 2015