Tailings pond at the Marlin Mine in San Marcos, Guatemala. The water is ultra-blue due to the cyanide and other chemicals used to extract gold from the soil. Photo by author.

GUATEMALA CITY — Amidst the growing controversy surrounding foreign-controlled resource extraction and mega-development projects in Guatemala, populist leader Bishop Alvaro Ramazzini, together with a group of community leaders, is demanding a two-year moratorium on the granting of mining concessions by the Guatemalan government.

In the municipal capital of San Marcos in northwest Guatemala, Ramazzini, with several hundred of his supporters, took to the streets Feb. 24 to call on the country’s Congress for a two-year halt to the sale of mineral rights to international companies. This pause would give the current government enough time to review a petition to reform the existing mining code.

Ramazzini and numerous local and international organizations contend that the current mining law does not properly consult local communities as defined by the International Labour Organization’s Convention 169, which guarantees the right of indigenous people to exercise control over the form of development that occurs in their traditional territory.

Guatemala signed onto the ILO 169 agreement shortly after the affirmation of the Peace Accords in 1996.

Critics of the current government led by President Alvaro Colom argue that the existing mining law fails to address issues surrounding water usage and the low requirement of royalty payments to the state, which stands at one percent of the revenue earned.

According to Guatemala’s Ministry of Energy and Mines, there were 356 mining licenses granted as of December 2006, with hundreds more in the process.

Oxfam International reports that at least 10 percent of the country’s land has been turned over to international corporations for mineral exploration and exploitation.

In recent months, as many as 20,000 citizens from the Highland departments of Huehuetenango and San Marcos have voted against mining operations in regional consultas, or community referendums, which are legal yet non-binding in Guatemalan courts.

The nearby Marlin Mine, a cyanide-leaching, open-pit gold mine owned and operated by Canada’s Goldcorp Inc., has been one target of community criticism, given its well-documented health and water contamination issues, as well as its local opposition movement.

A large dike is holding the cyanide-tainted mine tailings in a pond, but the pond is filling up rapidly, and the mine company is expected to release the tailings into the river at some point in the future.

Countrywide Resistance
The Feb. 24 rally was by no means unusual in Guatemala. Hardly a day passes without news of another protest, roadblock, or urgent community meeting to discuss the prospects of another mega-project.

Across the country, from the Western Highlands to the lowland Oriente, large hydroelectric dams, mines, super-highways, and cement plants are being planned, often with limited consultation with, or support from, the indigenous Maya majority.

The number of proposed mega-projects has increased as part of the government’s plans for development and modernization, and under the framework of the newly ratified Central American Free Trade Agreement, CAFTA, which offers incentives to international companies.

Despite the promise of much needed job opportunities and rural services, this model of development often leaves communities socially divided and environmentally damaged, and, according to Ramazzini, leads to an increase in poverty and inequality.

“Green” Mega-development
After mining, hydroelectric dams are the target of the hottest mega-development debate in Guatemala. As stated by the current administration, there is an energy crisis in Guatemala, and one of the methods in solving this issue is by implementing clean “green” energy producers.

According to Julio González of Madre Selva, a Guatemala City-based environmental organization, the motive behind these new hydro-projects is for the sale of electricity to surrounding countries, which they say will benefit only particular economic interests and foreign companies.

Far from bringing new employment to dam-affected regions, González told the daily La Prensa that, “they [the companies] hire 50 or 60 laborers during the construction, and afterwards, no one.”

The latest high-profile conflict is taking place in the Ixcan, in the far north of the country, where the $400 million, 181 megawatt Xalala dam has been proposed and aggressively pursued by the current administration and the National Institute for Electricity, INDE.

According to a study by International Rivers, a US based nongovernmental organization, if the dam project is carried out, at least 2,300 Maya-Qeqchi farmers will be displaced, and the local environment will be severely damaged.

In April 2007, a popular consulta was carried out in the affected communities. Of the more than 21,000 people who voted, 91 percent rejected the Xalala dam proposal. Nevertheless, INDE continues to solicit from international development agencies for funding to carry out the project. 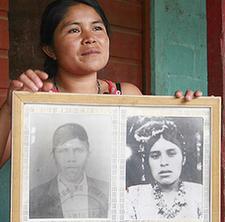 Paulina Osorio was born in a village flooded by Chixoy Dam. Her parents were killed by the Guatemalan Army when she was nine. Photo by Erik Johnson, International Rivers Network.

Digging Up the Past
Guatemalans believe they have good reason to resist the prospect of more hydroelectric dams.

Over 30 years ago, when the INDE started the initial construction on the Chixoy hydroelectric dam in Baja Verapaz, about 90 miles north of the capital, it was hailed by the World Bank, one of its principal lenders, as an engineering miracle.

Since then Chixoy has nearly tripled its initial estimated cost, and now accounts for roughly 50 percent of the country’s national debt.

Despite the economic mishaps, and the fact that the dam may have to be completely dismantled in the near future due to structural problems and the lack of a proper environmental impact statement, Chixoy remains a symbol of a turbulent era in Guatemala’s history.

When the Maya-Achi people of Río Negro, one of the main villages affected, decided they would resist their forced displacement to make way for construction of the reservoir, they were labeled “subversives” by the military, and systematically massacred by paramilitary groups.

According to official reports, 444 men, woman and children were killed, and many others lived in hiding for years in the wooded gulches above the flooded basin.

In all, at least 3,400 people were displaced in the region, and many are still waiting for promised reparations from INDE and the World Bank.

Small Gains
Between the media’s coverage of assassinations, bus accidents, and illegal security organizations that murder with impunity, there is an occasional story detailing the small gains made in the countryside, as ordinary Guatemalans stand against the growing forces of globalization by initiating their own vision of development.

Last week, community leaders from five municipalities met in Chiquimula, in southwestern Guatemala, to discuss a massive reforestation, sustainable agriculture, ecotourism, and potable water project, which will receive funds in part from the Nature Conservancy.

“Today a project is born that will develop the mountain, that for years was neglected,” said a mayor from Huite, a nearby community.

Elsewhere, such as in Chuarrancho, where a large dam is planned on the Río Motagua in the dry intermountain region north of the capital, local leaders have voiced their opposition over the lack of consultation, and the likelihood that such a project would destroy their way of life.

In years past, this type of discontent would label them as subversive, or communist, but today, the open dialogue is empowering and has the potential to bring about a change in the way development is perceived and carried out.

Due in part to the massive opposition against the Xalala hydro-project, the only construction company to show interest in building the dam, Odebrecht [of Brazil], has withdrawn its submission.

With funds drying up in the United States and Canada because of the economic crisis, numerous mega-development projects, such as Skye Resources’ nickel mine in El Estor, are in an indefinite holding pattern. –

This story first appeared in March 5 on Environment News Service.