For thousands of years, Whey-Ah-Whichen has been a site of importance to the Tsleil-Waututh people. This hospitable flat peninsula in the Pacific Northwest was home to one of their major villages, standing in the shadow of surrounding hills and mountains covered in towering Douglas fir and other ancient trees. Today, Whey-Ah-Whichen is the site of Cates Park, so-named by the descendants of English colonists in what is now British Columbia. It overlooks Burrard Inlet, a finger-like extension of the Salish Sea separating the cities of Vancouver and North Vancouver. The Tsleil-Waututh still live nearby, many of them on a reserve just down the highway.

On July 14, Tsleil-Waututh community leaders brought together several hundred people for a rally on the site of the former village. Many carried signs with messages including “Water is Life,” “Stop Kinder Morgan Pipeline,” and “Protect the Water, Land, Climate.” They came to participate in a fight against one of the largest proposed fossil fuel infrastructure projects in Canada, an expansion of the Trans Mountain pipeline that would transport tar sands oil from Alberta to a Kinder Morgan-owned storage facility directly across the inlet from Whey-Ah-Whichen. There, oil from the pipeline would be loaded into tankers for transport to the United States or across the Pacific.

The rally was only the latest manifestation of the indigenous-led resistance to the Trans Mountain project, which has grown in size and boldness this year. As more and more people arrived at the park, some prepared to take to the water in kayaks, canoes and other small vessels. Hundreds of others massed near the shoreline, watching as the boats headed across the inlet and gathered in front of the razor-wire fence erected by Kinder Morgan to keep people away from its facility. From one of the canoes, Tsleil-Waututh elder Amy George led a water ceremony expressing participants’ intent to care for and protect the inlet.

On the shore below Whey-Ah-Whichen, the smell of salt and slowly-drying seaweed permeated the air as the tide receded. Canada geese floated on the water among the kayaks, and tiny crabs scurried between pebbles on the beach. The crabs, a traditional food of the Tsleil-Waututh, were one reason people had gathered here today.

“The whales and fish, the crabs and lobsters, they need us to be their voices because they can’t speak for themselves,” said Amy George after her canoe returned to shore. George is credited with launching the resistance to the Trans Mountain pipeline in the Greater Vancouver area.

Protectors, not protesters
“We’re not protesters, we’re protectors,” George said earlier that morning. “We’ve been doing this since the first contact with Europeans, fighting to protect our land and water. Now some Europeans are joining our movement—we’re finally getting together. If the oil from this project spills, one dump will ruin the water from here to Prince Rupert, here to California.”

When the Tsleil-Waututh first learned about plans to expand the Trans Mountain pipeline, then backed by Kinder Morgan, not everyone was sure the nation of slightly more than 500 people could realistically take on one of North America’s largest oil infrastructure companies. Cedar George-Parker, a member of the extended George family that has led the resistance, described how Amy George convinced the community to oppose the project: “She told us we needed to warrior up.”

Kinder Morgan’s plan for Trans Mountain involves expanding an existing tar sands pipeline to triple its carrying capacity. Among other things, this would entail building 14 new storage tanks on Burrard Inlet and boring a tunnel through nearby Burnaby Mountain so that a new branch of the pipeline can deliver more oil to the facility.

According to the grassroots environmental group Stand.earth, the expansion project would lead to a 700 percent increase in the number of tar sands oil tankers plying the ecologically sensitive Salish Sea. An accident on a tanker, or at the Burrard Inlet facility, would be devastating for communities throughout the region. 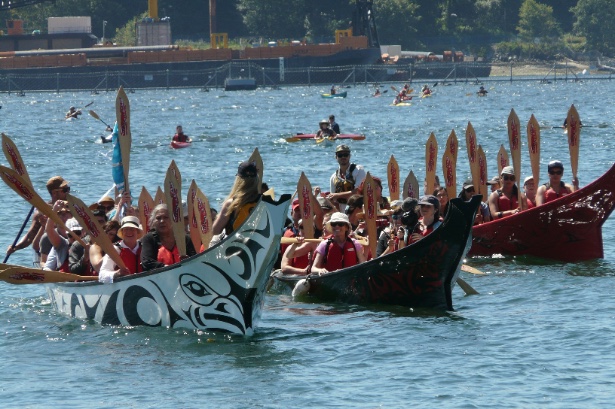 “What we need is clean water for our children and grandchildren,” Cedar George-Parker said to the crowd at the rally. “For many years our people took our food from the water. Now it’s time for us to give back, to protect the inlet from the oil and bitumen that will kill it.”

A study commissioned by the Tsleil-Waututh Nation predicts a large oil spill in the inlet would expose over a million people to acute health effects from air toxins. “I don’t want my little brother to be one of those people affected,” George-Parker said, citing one of his main motivations to keep fighting.

The struggle escalates
While resistance to Trans Mountain has been building for a decade, it heated up this year as Kinder Morgan started preliminary construction activity along the pipeline route. In March, members of the Tsleil-Waututh built a traditional watch house near the route of the pipeline in Burnaby just south of Burrard Inlet. Around the same time, 10,000 people gathered nearby for one of the most massive displays of opposition to the pipeline so far. Tsleil-Waututh water protectors and their allies have blockaded initial phases of construction, protested at Kinder Morgan’s annual shareholder meeting in Houston, and turned the watch house into a visible symbol of resistance. More than 200 have been arrested during nonviolent actions opposing the pipeline so far.

In April, with public opposition growing ever fiercer, Kinder Morgan announced it would suspend “non-essential” activity related to the Trans Mountain expansion while it determined whether or not to move forward with the project. The company set a May 31 deadline for making a decision. Throughout the Salish Sea, communities at risk waited in hopes that victory was near.

Then, in late May, with the deadline fast approaching, Prime Minister Justin Trudeau announced that the Canadian government would spend billions to buy the Trans Mountain project from Kinder Morgan and build the expanded pipeline using taxpayer dollars. With the stroke of a pen, the Trans Mountain tar sands expansion turned from a private industry endeavor to an official project of the Canadian government. Trudeau, previously regarded as a progressive voice for action on climate change, emerged with his climate reputation in tatters. Within 12 hours of Trudeau’s announcement, thousands of people gathered for an impromptu rally in Vancouver expressing public outrage.

“In the beginning of this fight, we were trying to protect our land and water from Kinder Morgan,” Amy George told the crowd in Whey-Ah-Whichen. “We’ve made them give up, and they’ve gone back to Texas. I don’t care who’s still backing this pipeline, we’re still saying no. It would take until 2050 to pay off the taxpayer debt Justin Trudeau wants to use to finance this project. I’m a taxpayer, and I don’t want to be a shareholder in dirty energy.”

Sending a global message
Even as the movement to stop Trans Mountain has been forced to shift targets from Kinder Morgan to the government of Canada itself, members of the Tsleil-Waututh First Nation—including the George family—have continued to lead the opposition. Will George, another family member who played a key role in organizing the rally, recently spent 40 hours with 11 other water protectors suspended from a bridge, blocking a tar-sands tanker leaving Burrard Inlet. And in the years since Amy George first convinced her community to oppose Kinder Morgan, the movement to stop the pipeline has become a rallying point for indigenous leaders throughout Canada.

“The message we’re gathering with here today is now getting out to the world,” said vice president of the Union of British Columbia Indian Chiefs Bob Chamberlain, another one of the rally speakers. “We’re sending a message that we don’t need to build and capitalize on something that just isn’t sustainable, like this pipeline. Our opponents characterize us as ‘activists,’ as ‘radicals.’ Imagine, we’re radicals because we want clean air and water. Well, if that’s what a radical is, I’m glad to be one with you.”

The movement to stop Trans Mountain has drawn comparisons to the encampment that delayed construction of the Dakota Access pipeline on the Standing Rock Sioux Reservation in 2016. During the waning days of the Obama administration, that movement brought together tribal representatives from across North America to oppose a major oil pipeline that threatens the Standing Rock Sioux’s drinking water and right to control their natural resources. As happened at Standing Rock, the Trans Mountain opposition has been joined by thousands of non-indigenous activists concerned about everything from endangered species to climate change.

In the Trump/Trudeau era, when national governments on both sides of the US-Canada border have firmly allied themselves with the oil industry’s expansion plans, countless people across North America have taken inspiration from Standing Rock. And from Burrard Inlet to the Gulf of Mexico, indigenous peoples continue to lead the way. Indigenous-led encampments have sprung up in the paths of the Bayou Bridge pipeline in Louisiana and the Line 3 pipeline in Minnesota. And if construction begins on the Keystone XL pipeline next year—as TransCanada, the owner of that project, predicts it will—the Cheyenne River Sioux Tribe has sent clear messages that its members intend to stand in the way.

Nor will the resistance to Trans Mountain be going anywhere. As the possibility of major construction work beginning on the project grows imminent, and with the watch house already serving as a permanent base for water protectors along the route of the pipeline, the potential exists for a confrontation on the scale of Standing Rock. If that happens, protectors like Amy George believe they will simply be upholding their nation’s long tradition of caring for the land.

“We’re not doing something new by carrying on the fight for the inlet,” George said. “During thousands of years that we were here, there were no endangered species. We cared for the streams and didn’t overpopulate to tax our food sources. If there’s a spill, it means death to everything in the water. It means saying goodbye to the few orcas left in the Salish Sea.”

Even a recent heart procedure won’t stop George. “I’m still here saying no,” she said. “We’ve been saying no to Kinder Morgan all along, and it doesn’t change things now that we have to fight the so-called leader of the country.”

Photos by the author.