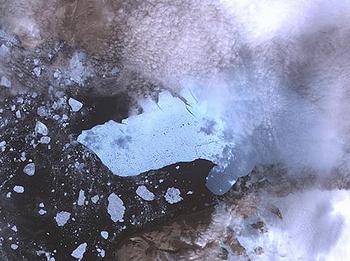 “Several diverse extreme weather events are occurring concurrently around the world, giving rise to an unprecedented loss of human life and property. They include the record heatwave and wildfires in the Russian Federation, monsoonal flooding in Pakistan, rain-induced landslides in China, and calving of a large iceberg from the Greenland ice sheet,” said the World Meteorological Organization in a statement August 11.

“These should be added to the extensive list of extreme weather-related events, such as droughts and fires in Australia and a record number of high-temperature days in the eastern United States of America, as well as other events that occurred earlier in the year,” said the WMO, a specialized agency of the United Nations.

The World Meteorological Organization is the UN system’s voice on the state and behavior of the Earth’s atmosphere, its interaction with the oceans, the climate it produces and the resulting distribution of water resources.

“The occurrence of all these events at almost the same time raises questions about their possible linkages to the predicted increase in intensity and frequency of extreme events, for example, as stipulated in the Intergovernmental Panel on Climate Change’s Fourth Assessment Report published in 2007,” the WMO said.

The 2007 IPCC Summary for Policy Makers stated that “…the type, frequency and intensity of extreme events are expected to change as Earth’s climate changes, and these changes could occur even with relatively small mean climate changes. Changes in some types of extreme events have already been observed, for example, increases in the frequency and intensity of heat waves and heavy precipitation events.”

“While a longer time range is required to establish whether an individual event is attributable to climate change, the sequence of current events matches IPCC projections,” the WMO said.

The meteorologists explained how each of the current extreme weather events arose.

The heatwave in the European part of the Russian Federation is associated with a persistent pressure ridge that appeared in June 2010. Initially, it was associated with the Azores high, but later was reinforced by a strong inflow of warm air from the Middle East.

More than 20 daily temperature records were broken including the absolute maximum temperature in Moscow. The high temperatures triggered massive forest and peat fires in the European part of the country. Some villages were burned completely, with smoke and smog adversely and greatly affecting the health and well-being of tens of millions of people.

The floods in Pakistan were caused by strong monsoon rains. According to the Pakistan Meteorological Department, the instant rain intensity reached 300 millimeters over a 36-hour period. The strong monsoon rains led to the highest water levels in 110 years in the Indus River in the northern part of the country, based on past records available from 1929. More areas in central and south Pakistan are affected by the floods.

In Pakistan, the death toll to date exceeds 1,600 people and more than six million others have been displaced. Some reports indicate that 40 million citizens have been affected by the floods.

The monsoon activity in Pakistan and other countries in Southeast Asia is aggravated by the La Nina phenomenon, now well established in the Pacific Ocean.

China also is experiencing its worst floods in decades. The recent death toll due to the mudslide in the Zhouqu county of Gansu province on August 7, exceeded 700, with more than 1,000 people missing. In addition, 12 million people are reported to have lost their homes owing to the recent floods.

On August 5, 2010, the MODIS sensor on NASA’s Aqua satellite detected calving from the Petermann Glacier in northern Greenland. The largest chunk of ice to calve from the glacier in the past 50 years of observations and data (since 1962) measures more than 200 sq. km.

Tens of thousands of icebergs calve yearly from the glaciers of Greenland, but this one is very large and because of its size more typically resembles icebergs in the Antarctic.

Climate extremes have always existed, said the WMO, “but all the events cited above compare with, or exceed in intensity, duration or geographical extent, the previous largest historical events.”

According to Roshydromet, Russia’s Federal Service for Hydrometeorology and Environmental Monitoring, studies of the past climate show no record of similar high temperatures in Russia since the 10th and 11th centuries more than 1,000 years ago.

THE CLIMATE JUSTICE GROUNDSWELL
From Copenhagen to Cochabamba to Cancún
by Karah Woodward, The Indypendent
World War 4 Report, June 2010