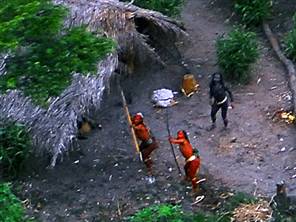 Members of one of the world’s last “uncontacted” peoples were spotted and photographed from the air in a remote part of Brazil’s Acre state near the Peruvian border. The flights were undertaken by the Brazilian government to prove the existence of uncontacted tribes in a region under danger from illegal logging. One of the images, released May 29, shows two men covered in bright red body paint poised to fire arrows at the aircraft. Another photo shows about 15 near thatched huts, some also preparing to fire arrows at the aircraft.