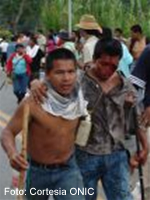 The National Indigenous Organization of Colombia (ONIC) reports nine were injured June 13 when a unit of the National Police Mobile Anti-Riot Squad (ESMAD) attacked more then 300 indigenous protesters participating in a land occupation Hacienda la Emperatriz, at the indigenous reserve of Huellas Caloto, Cauca department. The ONIC statement said the nine protesters were receiving medical attention at a clinic in Toez village, but the attack had not broken the occupation, and urgently called for intervention from human rights monitors.