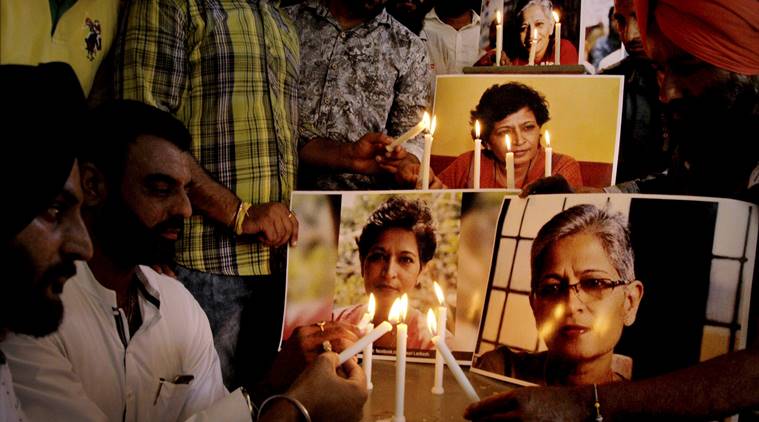 As the year 2019 is approaching the finish line, India appears to have improved its journalist murder index—with authorities counting only two slain in circumstances directly related to their work this year. Reporters Without Borders counts nearly 50 journalists killed for their work to date this year (compared to 95 in 2018), and India’s share has also gone down considerably—from six last year. Moreover, none of its neighbors except Pakistan and Afghanistan—that is, Bangladesh, Nepal, Myanmar (Burma), Sri Lanka, Maldives, Tibet (under China) and Bhutan—have reported any incident of a scribe’s murder this year. Pakistan and Afghanistan topped the list of journo-murders in South Asia, with each country losing five journalists to assailants in 2019.

The two murders confirmed as being related to journalism in Inida were of Andhra Pradesh-based reporter K. Satyanarayana and Madhya Pradesh-based Chakresh Jain. Young reporter Satyanarayana, who worked for Telugu daily Andhra Jyothy, was hacked to death by assailants at Annavaram village in East Godavari district on the night of October 15. Local accounts reported that Satyanarayana was attacked on an earlier occasion too, and had informed to the police. Jain, a independent freelancer, died of serious burn injuries following a quarrel with the assailant at Shahgarh locality on June 19.

However, in several other cases it is yet to be confirmed that the victims were targeted for media activities. Others killed this year include Vijay Gupta, a Kanpur-based scribe shot in an apparent family dispute October 29; Radheyshyam Sharma, a Kushinagar-based journalist apparently murdered by neighbors on October 10; Ashish Dhiman, a Saharanpur-based photo-journalist shot dead along with his brother on August 18; Anand Narayan, a Mumbai reporter killed in attack at his home on June 4; and Nityanand Pandey, a magazine editor in Thane killed by an employee on March 17.

In a case that may warrant closer scrutiny, Kerala-based journalist K. Muhammed Basheer lost his life August 3 when he was mowed down by a running vehicle, driven by a senior government officer.

There were also some who survived. Bihar scribe Pradeep Mandal was targeted in an attack on July 28. He written a number of news stories exposing the local liquor mafia for Dainik Jagaran newspaper. A Guwahati-based scribe named Naresh Mitra died on December 9 after sustaining head injuries in a mysterious accident in the city.

If we discount the killing Naresh Mitra, the trouble-torn northeastern region of India—now being rocked by angry protests over the controversial new citizenship law—has evaded the murder of any journalist for two consecutive years. This is somewhat surprising, as the northeast is the scene of multiple armed insurgencies over demands for greater autonomy or independence. Among the northeastern states, Tripura reported the murder of five media workers between 2013 and 2017, while Assam and Manipur each witnessed their last killings of journalists in 2012.

For Indian working journalists, the year 2017 is recognized as a particularly deadly year, as 12 scribes were murdered or lost their lives in suspicious situations. Two of these cases were in Tripura.

In 2016, India witnessed the targeted killings of six scribes, whereas the previous year the country lost five journalists to assailants. Only two were slain in 2014, but the year before that was also particularly deadly; 11 journalists were killed in 2013,  including three from Tripura.

Various media rights bodies including Paris-based Reporters Sans Frontiers (RSF), New York-based Committee to Protect Journalists (CPJ), and the Brussels-based International Federation of Journalists (IFJ), have come out with reports tracking the number of journalists murdered worldwide in 2019, which is the lowest death toll in 15 years. Those organizations demanded full investigations and punishment of the culprits.

These organizations also note that many more journalists have been the target of threats, assaults and imprisonment. Over 350 journalists were imprisoned worldwide in 2019, wuth China, Turkey, Egypt, Saudi Arabia, Iran and Vietnam taking the lead.

Nava Thakuria is a wirter and media activist based in Guwahati, northeast India.

A different version of this story appears in India’s Counterview.

AFTER GUARI LANKESH
Standing for the Human Rights of Journalists in India
by Nava Thakuria, CounterVortex
CounterVortex, October 2017