A group of activists calling themselves "Lukashenko Busters" held a demonstration outside the London Stock Exchange June 7 to protest the trading in companies that do business with state-owned enterprises in Belarus. Ruled for nearly 20 years by Alexander Lukashenko, "Europe's last dictator," Belarus faces sanctions in the US but not the United Kingdom. The protesters pointed out that London-traded firms ENRC, METINVEST and Ferrexpo all do business with Belshina, Belarus' parastatal industrial giant. "Do the millions of pension savers know that their pensions funds Lukashenko's war on the opposition?" organizers asked in a statement, charging that Belarusian state companies fund Lukashenko's KGB, which has overseen a wave of harsh repression since contested elections in December 2010.

Earlier in the week, Lukashenko Busters placed 50 body bags (with live activists inside) around London, to demand pressure for the release of political prisoners in Belarus "before they become dead bodies." The group is calling for sanctions and a boycott of the Lukashenko regime. (Lukashenko Busters press release, June 7, received by e-mail) 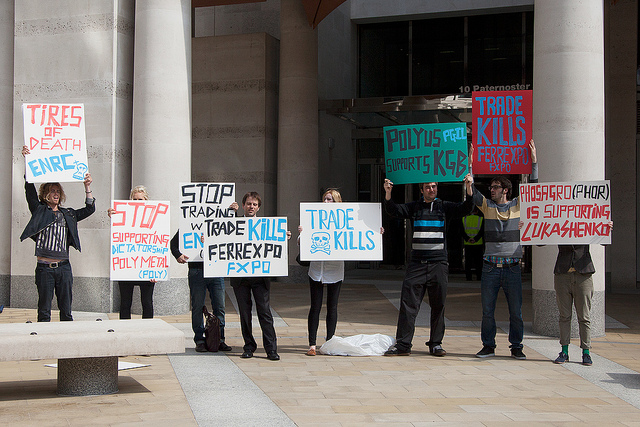